This opened on August 31, 1990 as Boomerangs Theatre with four screens. It was renamed Northeast 4 on June 12, 1992 and renamed again shortly after as the Northpark Theatre. Closed on March 31, 1996. It had been on an discount policy its entire life. It was demolished in 2011/2012 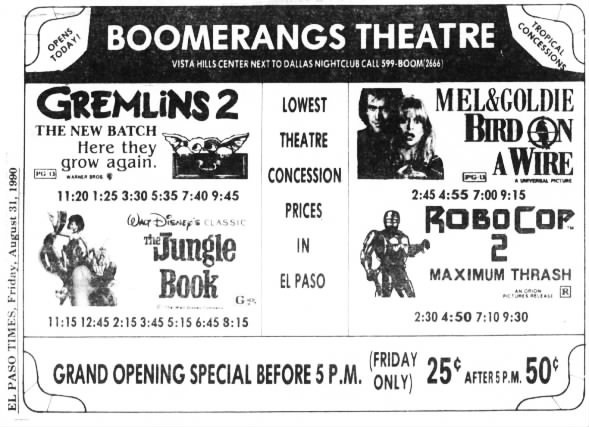 Video? Can you send me a link for the video please

Located in the former S.S. Kresge’s spot in Northgate turned NorthPark mall was a family fun center known as the NorthPark 4 Theatre and sometimes Boomerangs Theatre, and sometimes Northeast 4 Theatre, and sometimes North Park 4 Theatre. Well, you get the idea. It was a sub-run discount theatre that launched August 31, 1990 and was the replacement for the UA Northgate Theatre, itself a sub-run discount house on the mall’s exterior. UA was playing out its lease and leaving in 1990. But surprise, surprise to Boomerangs, UA was enticed to stay with likely a near rent free option. That left two discount houses in ostensibly the same complex. It was not uncommon to have two movie houses in the same mall complex, especially an interior and an exterior… but both with discount policies was a bit strange. Obviously, one of the two theaters had to go.

The first to blink was the exterior theater. UA left the Northgate in 1994 citing lack of audiences. But Take One came on board to operate the discount house. In 1995, Boomerangs sold the interior theatre to Hollywood Entertainment Circuit. The theatre closed March 31, 1996 with unpaid bills. The theatre was vacant but was said to have been undergoing some remodeling as the fledgling Take One / Unicomm planned to reopen the theatre as a ten-screen, first-run house. Signs went up in 1996 with the coming soon announcement for Fall 1996. But 1996 passed, as did 1997, and so did 1998. That’s the year that the company announced bankruptcy. Not surprisingly, the company closed its outdoor complex (the former Northgate turned Take One) and stopped its remodeling plans on the interior there in 1999.

A video shot in 2011 shows that virtually no remodeling appears to have taken place other than possibly the concession area as the final 1996 movie showings were still listed on the four auditoriums' signage overhangs some 15 years after the theater had closed. The entire mall was razed in 2011/2012 ending the “coming soon” dreams at the NorthPark 4.