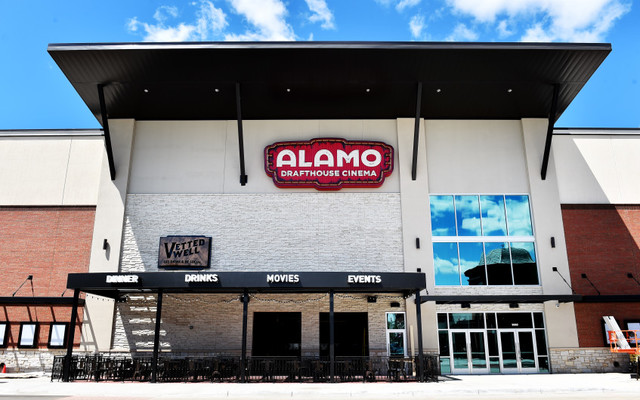 “Minnesota’s most luxurious movie theater” and “a temple for film and cinema,” said Bill DiGaetano, CEO of the Texas-based ALAMO DRAFTHOUSE theatre chain of the new Woodbury, Minnesota complex with features, believed to be unique in the state, including 1., no unaccompanied children under the age of 18; 2., no concession stand; food orders are made from the seats; 3., popcorn in metal bowls, not in bags or tubs to avoid crinkly wrapping; 4., full bar and restaurant menus for all seats in all screens at all times. Guests order off a menu and wait-staff deliver it; 5., no pre-movie commercials but rather a short feature about the movie they came to see; 6., no late seating, even for customers with tickets; 7., a no-talking, no-texting rule. Guests get one warning, then are removed. Patrons are encouraged to complain about others' texting or talking. Food items include fresh-made pizzas, and film-appropriate meals for example, during a scene of “The Godfather” in which gangsters eat spaghetti, spaghetti would be served in the theater. The 2017 film “The Big Sick” involved a Pakistani immigrant, so Alamo added Pakistani food to the menu for the duration of the screenings. During 2016’s “Ghostbusters” when a "Marshmallow Man” was torched, every table got a S’more featuring toasted marshmallows. Before or after screenings, guests may lounge in the 76-seat restaurant-bar area with two garage-style doors that open in good weather. Thirty-two beers are on tap, all local brews which can be served in the theatres. On Sunday, July 22, 2018 grand-opening tickets were $5. Normal pricing — $8 days and $11 in evenings — began on July 27.