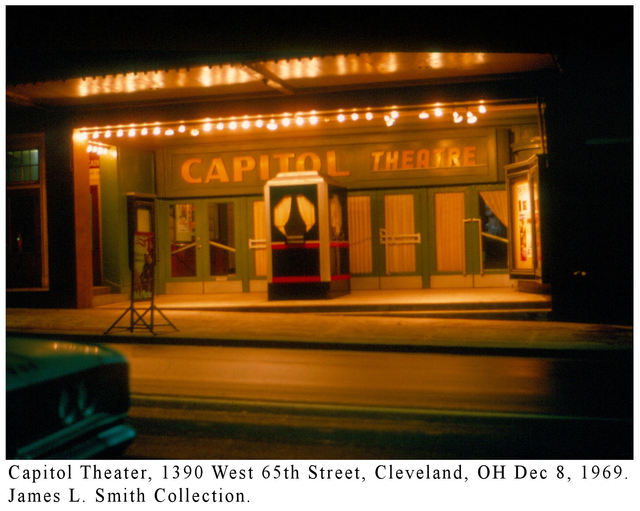 This theatre, which is located in the Gordon Square Building, opened as a neighborhood theatre by 1924 when it was operated by the Ohio Amusement Co. It was closed in the late-1960’s. Since the Gordon Square Building was restored and renovated in 2003, there was talk of restoring and reopening the theatre as an art house, but nothing came of it for a while. The theatre, however was well maintained since it closed, but after 35 years of closure, some renovation was needed.

It re-opened with three screens on October 2, 2009, and is an all digital cinema.

This is the Plain Dealer article referred to from the link in the previous post:

$7 million renovation of Capitol theater to begin
by Karen Sandstrom
The Plain Dealer
May 14, 2008 09:18A

On a rainy Cleveland evening in April 1921, hundreds of people gathered at West 65th Street and Detroit Avenue to celebrate the newly built Gordon Square Arcade and its attached movie theater, the Capitol.

After a few speeches and a tune from a six-piece orchestra, the Capitol screen lit up with its debut feature film, “The Inner Voice.” The female lead, actress Agnes Ayres, would lose her fortune years later in the stock market crash. But at the moment, the silent-film world still held promise, and she was a star.

A little of that 1921 excitement might be in the air at 4:10 p.m. Wednesday as community leaders in the Detroit-Shoreway neighborhood gather inside the Capitol to celebrate a $7 million project aimed at renovating the theater and invigorating the neighborhood.

Construction begins Thursday to turn the theater, empty for 23 years, into a three-screener specializing in independent films. It is slated to reopen in April 2009.

This marks the newest and largest investment to date in the Gordon Square Arts District.

The district is a roughly 24-block area shaping up as a Mecca for galleries, boutiques, eateries and theaters. The overall plan is to invest $30 million in creating a streetscape along Detroit, renovating Cleveland Public Theatre and building a new home for the Near West Theatre, a community theater that reaches out to disadvantaged youths.

The hope is that 100,000 people will see movies there every year, he says. As an arts district, the neighborhood “needs an anchor, a catalyst.”

The Capitol will be owned by Detroit Shoreway and operated by Cleveland Cinemas, which runs the Cedar Lee Theatre and five others.
The intellectual menu will include the occasional big Hollywood movie.

And, like the Cedar Lee, the concessions menu will include locally baked pastries, fresh sandwiches and beer.

Ramsey, Cleveland City Councilman Matt Zone and Joy Roller, executive director of the Gordon Square Arts District, envision the Capitol as part of a little theater district that draws visitors who stay to dine and shop. They hope the cool factor will encourage brain-gainers to buy some of the area’s new houses.

The Capitol is also an important nod to the past. Zone says his grandparents lived on West 65th Street. His parents dated at the Capitol.

“To see new life being breathed into that place is just reinvigorating,” he said.

When the Capitol was unveiled in 1921, it boasted a single screen in a proscenium above a stage outfitted with a pipe organ — live musical enhancement for all that silent action onscreen. There were about 800 seats on the main floor and another 400, arranged on ascending steps, in the balcony.

Bare bulbs surrounded a wagon-wheel-style light fixture that illuminated an intricately painted ceiling — “the color scheme is old rose, ivory and gray,” reported the April 9, 1921, edition of The Plain Dealer. Plaster columns and painted medallions decorated the side walls. A second-floor mezzanine had a decorative fireplace.
When talkies supplanted silent films in the 1930s, much of the wall decoration was covered in fabric to improve acoustics. But the theater played on through the war years and after, as the area boomed with families.

In the 1970s, it closed for a while, then reopened showing films from eastern Europe. In the early 1980s, the Capitol also screened movies from the Cleveland International Film Festival.

The last performance was a vaudeville show presented by Cleveland Public Theatre in 1985.

In 1997, Detroit Shoreway, which by then owned the Capitol as well as the rest of the Gordon Square Arcade, secured $50,000 to stem decay of the theater (roof leaks had caused significant water damage), remove some of the debris and hire an architect to draw up preliminary plans for a renovated theater and street improvements along Detroit.

Those plans sat idle until recently, when the Gordon Square Arts District emerged to lead fund raising for arts investment in the neighborhood.

Of the $7 million that the renovation is expected to cost, $4.5 million comes by way of tax-credit equity.

In this case, investor National City Corp. recoups much of its money through federal New Market tax credits granted by the government to encourage improvements in low-income neighborhoods. Federal and state historic-district tax credits also have been granted.

Marous Brothers Construction, designer-builder of the renovation, will donate $100,000 in services.

Architect Chris Auvil, who works for Marous, said the theater has great presence.

“I love the neoclassical nature of it — the exuberance, the digging back into historical roots. It’s just a very elegant space,” he said.
“Although we will not be able to restore everything, we want to respect what’s there.”

When the job is done, the main theater will be outfitted with 400 plush seats with cupholders. The balcony will become two 100-seat theaters.

And there won’t be a hint of old-fashioned film. Cleveland Cinemas President Jonathan Forman said the Gordon will have all-digital technology. That makes for higher-quality viewing and allows the theater to show 3-D movies, live concerts by satellite and other nontraditional programs.

West Siders have long asked Forman to deliver something like the Cedar Lee a little closer to home, he said.
“I think the audience is big enough that it can support two [independent-film] theaters in two different parts of the city,” he said.
Eight months before Gordon Square and the Capitol Theatre first opened back in the ‘20s, investors published a newspaper ad to boost enthusiasm for the project. “The Time to Pick Cherries Is When They Are Ripe!” the ad shouted in bold type.

It went on to promise that “Gordon Square will eventually be to Cleveland what Times Square is to New York City.” No one speaks in such overblown terms today.

Still, Foreman was pleasantly stunned by what he saw when he started looking at the neighborhood.

“The truth is, I had no idea what was going on in that area, and holy cow!” he said.

“There is such passion and such growth and such movement.”

The last time films were shown at the Capital Theater was the summer of ‘82 when River and Tom Smith (Liberation Brew) created the Cleveland West Film Society. The films “King of Hearts” and “Harold and Maude” drew big crowds. There is hope the the Variety Theater neighborhood will experience a similar revival that the Detroit Shoreway neighborhood has, good luck Capital Theater.

I’m sitting at Gypsy Bean Cafe looking out the window at Capitol Theater across the street. There are workers outside painting the marquee among other things. Looks like it’s almost done. A friend told me it’s supposed to reopen this summer but I’m not sure what his source is.

According to the Gordan Square Arts District website the grand opening will be Oct 1st – 11th, 2009. I can’t wait! I won’t have to drive through the city to the Cedar Lee anymore.

Here are more details about the October 2 reopening from the website www.clevelandcinemas.com

Friday, October 2 at 9:30 AM – Ribbon Cutting Ceremony – Be on hand to witness the historic reopening and dedication of the Capitol Theatre. Following the dedication ceremony there will be a showing of Casablanca. (This event is free and open to the public but you must have a ticket. Tickets can be picked up at the Detroit Shoreway offices starting at 9 AM on Friday, September 25th.)

Friday, October 2 at 7:00 PM – A Capitol Evening opening night party. Tickets are on sale now in the Cleveland Cinemas store for this exciting event which includes admission to the film of your choice druing the 7:00 round and then an after party in the Gordon Square Arcade from 9 – 11. Please make sure you select the appropriate item in our store the film that you want to see when you purchase your ticket to this event.

Screens should now be three.

the marquee can been seen in the background of two scenes in the 1995 comedy movie Tommy boy.

That would be a different Capitol Theatre. Tommy Boy says it takes place in Sandusky, Ohio. Very little was actually filmed in Sandusky, or in Ohio period. The bulk of the movie was shot in Toronto, Canada. None of it was shot in Cleveland to my knowledge and according to IMDB unless they greenscreened something in.