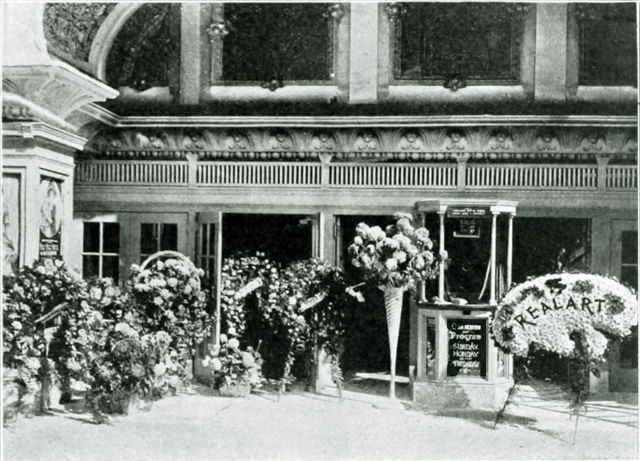 The Mission Theatre opened in 1905, but was badly damaged in the April 18, 1906 earthquake. It was quickly rebuilt reopening on June 16, 1906. The architect O'Brien & Werner designed both buildings. By 1908 it had been renamed Grand Theatre. Following renovations it reopened as the Realart Theatre in October 1919 by the Kahn & Greenfield chain. It was still open in 1926, but had closed by 1927.

Realart Theatre was the third name for the house at 2605 Mission Street. Originally opened in 1905 as the Mission Theatre, and operated as a legitimate theater, the house was damaged by the earthquake of April 18, 1906. The full extent of the damage was not apparent until the building partly collapsed some weeks later, one of more than a few buildings in the city that was further weakened by the frequent aftershocks of the quake.

After being quickly rebuilt, the house reopened, still as the Mission Theatre, on June 16, 1906. The San Francisco firm of O'Brien & Werner were the architects for both the original and the rebuilt theater. By 1908 the house had been renamed the Grand Theatre, and operated under that name for a bit over a decade. It was renovated by Kahn & Greenfield and reopened as the Realart Theatre in late October or early November, 1919.

Bill Counter’s “San Francisco Theatres” weblog has a page for the Realart with several photos, and scans of period articles, and a bit more detail about the theater’s history.