Last Reel at the Royalty 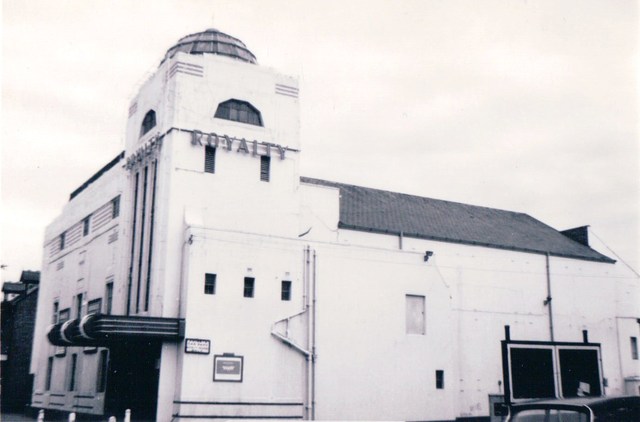 With its white and blue plaster work, glass dome and colourful neons, the Royalty Cinema was a familar landmark on the old A1 road, in the Gosforth district, about two miles north of Newcastle upon Tyne. It opened on 17th October 1934 with a special charity event, on the screen was Roy Fox & his Band in “On the Air”. The following day it was opened to the general public, with Al Jolson in “Wonder Bar” being the main film. In its heyday, was an up-market ‘super cinema’ that could seat 1,384 people in stalls and circle levels. The proscenium was 40 feet wide. Designed by Newcastle upon Tyne architects Marshall & Tweedy, with interior decorations by R.J. Richardson, it was always an independently operated cinema.

The Royalty Cinema’s last great success was the film “Grease”, when audiences queued around the block. However, by 1981, its future was threatened by rising fuel costs. The new owners hit on the idea of hosting music concerts, alongside the films. Adam and the Ants was one of the bands that played there. However, a small number of local residents protested and the owners found themselves in a ‘Catch22’ situation: they were prepared to spend money adding extra soundproofing to the building, however there was no guarantee of a music licence even if they did that.

The Royalty Cinema closed on 30th December 1981 with a Disney double bill of “Dumbo” and “The Incredible Journey”. I was lucky enough to get to know the staff during the final months when I made a video documentary about the closure. They were a great crowd of people who loved the Royalty Cinema passionately.

The interior was left intact. But, by July 1982, it had been badly vandalised. It was later set on fire and then in May 1984 the building was demolished and flats were built on the site.

The Royalty was opened on the 17th of october 1934, it was built by a company controled by EJ hinge, S Branford and Norman Chapman. The architects were ‘marshall and Tweedy’ the cinema was licensed for 1,384 seets.

It opened with the film ‘on the air’ proceeds went to charity. The normal program began on the following day with ‘wonder bar’ staring Al Jolson which had been on at the paramount (Later newcastle’s odeon) the previous month. in 1937 the royalty employed 27 staff, one manager, three operators, four day men, three cashiers, two cleaners, twelve usherettes, two page boys one of whom was releif operator, one chocolate boy and the releif manager. The usherettes and page boys where part time. The weekly page bill was 36 pounds. By the mid 70s time had caught up with the royalty In November 1974 its owners (still the royalty Gosforth limited) with donald chapman as chairman proposed to demolish the cinema and replace it with a five story entertainment complex with a mini cinema. This plan was rejected by the city council.

In September 1975 an enquiry was held into it with an alternative plan which was to convert the ground floor into a store with a cinema retained in the circle. Both schemes were turned down by the enviromental secretary on the grounds of over development of the site.

The royalty struggled in 1977, being offered for sale for Â£25,000 in april, Later that year several schemes were put forward (Hindu temple, a freezer center, a music hall with twin cinema) finally in june 1978 the royalty was bought by whitley bay entertainments (owners of ‘the spanish city’ which is a fun fiar by the coast) who proposed the convetional solution of a bingo club, objections came from local residents and from owners of the globe bingo hall (opposite the site of the cinema). By october the owners had agreed to include a luxury cinema in the former circle. Opposition continued.

The Royalty through out all this debate was still a working cinema, owner ship had now passed to ‘paul burton’ who managed ‘dexy’s midnight runners’ under tempory license the royalty became a venue for occasional pop concerts but a full lisence was refued by the magistrates on the grounds of noise. By October 1981 only the circle was in use. Despite an apeal a lisence was not granted and the cinema closed on the 30th of december 1981 with ‘The incredible journey’ and ‘Dumbo’.

The Building was put on the market for 80,000 pounds, it was bought by developers ‘longbarr’ who demolished the royalty in may 1984. An old peoples home was built on the site.

As a child my best freind’s mother and father worked at the royalty from the late 50s to the mid 70s. ‘Dorene chappelehow’ worked as an usherete and on the till. His father (Tucker Chappelehow) worked as the car park attendant (complete with black suite and cap!) he unpadlocked the entrance to the car park allowing cars to leave and enter. Myself and Micheal (chappelehow) were sometimes aloud in free of charge if we picked up rubbish pluss tipped the seats after the show.

I will never forget the total anarchy and joy of saturday childrens maternays, which to my knowlodge were always sold out. A till to the side of the building was used for these maternays. To my knowlodge this was the only time this till and entrance were used. I remember very well the royalty standing empty plus boarded up for what seemed a very long time. I managed to gain acsess toi the cinema not long before demolition took place. I remember that there was certantly no noticable vandalism at this point,though the building smelt very baddly of damp due to leaking roof/lack of maintanance at this time. Also I remember the cellar being completeley flooded making entry impossible. I knew a couple of the contractors who worked for ‘Thompsons of prudhue demolition workers’ they fenced the building off to commence demolition. Once demolition work had begun entry to the building became much easier in my veiw the bulk of vandlism was carried out at this time, as many young people could enter.

Due to my contacts with the demolition squad I was aloud to take some momentos (The Lense from ‘projector number 1’, a box of 1950s MGM 3d glasses plus a cash ledger from 1948 to 1952 stating all takings for those years plus films shown from week to week and all attendances, also what else was going on in Newcastle, IE fairgrounds or large horse racing events as this could be balanced off against bad takings for that week)

The information above is from personal memories also from Frank Manders wonderfull book ‘Cinemas of Newcastle’ published by Newcastle upon Tyne city libarys and arts.

I hope this information is of interest, yours Paul Meritt

I was there on the last night.I took a lot of photos before and after closure and during demolition.

The usherette and ticket office person was Mabel Chappelhowe. She worked there from the 1950’s until the final night in December 1981 and she appears in my video documentary which was filmed in the final few weeks of 1981.

In early 1982 I met with some of the staff, including Mrs Eastlake the former Manager and John Tessa the former projectionist. We met outside the Royalty building and we went inside to take a look. I remember how upset they were when they saw all the vandalism. The screen was ripped, the projectors were smashed up and there was graffiti on the walls.

They said they didn’t feel safe being in there. So we left. Up until then we had hoped the cinema might reopen. But that was the day when it became clear to all of us that it never would.

Also, quite some time before demolition work started, the building was set on fire damaging the stalls foyer area. I think that probably happened in 1983.

I have an interest in the royalty cinema as mabel chapelhow was my nanna.sadly she died in august 1992.mabel was a cashier and usherette at the royalty from the 50`s to the close in 1981.i can just about remember going there with my mam and dad and brother gary to see the final showing of dumbo in 1981.My mam maureen temple is mabels daughter and my uncles are steve and micheal chapelhow.we have been following the progress of royaltycinema.com and would be interested in obtaining a copy of the video documentry that geoff stafford made back in 1981.If anyone would like to contact me they can by going to members directory and send me an email.

In December 2006 it will 25th years since the Royalty closed. For the anniversary I am putting together a new version of the documentary, which will have better picture quality and sound, thanks to digital editing and a couple of corrections are necessary. The website will be up by then. Andy if you get in touch I’ll be happy to let you, Steve and Michael have a copy on DVD. The best way to contact me is via my website at geoffstafford.com.

I have very happy memories of the the time I spent at the Royalty with the staff including Mabel. They were a lovely group of people.

Does any one have any interior photos of the Royalty when it first opened or in it’s heyday. I took a lot on the week it closed and on closing night, also when it was derelict and being demolished. It would be nice to see what it looked like when it was new as it was very run down when it closed.