The History of Didsbury 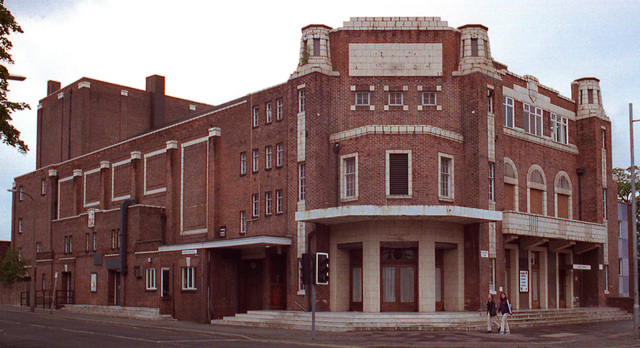 The Capitol Cinema was situated on the corner of Parrs Wood Road and School Lane in Didsbury – a suburb of Greater Manchester. A ‘super cinema’ designed by architect Peter Cummings, it opened on 21st May 1931 and was operated by the J.F. Emery Circuit. Seating was provided in the stalls & circle levels. However just eleven months later (on 25 April 1932) it was gutted by fire, leaving only the walls and entrance standing.

Peter Cummings was brought back to rebuild the cinema in a more ornate style and it re-opened on 16th August 1933. It was equipped with a Christie 4Manual/10Ranks organ, and lighting in the auditorium was via an elaborate Holophane system. It was taken over by the Union Cinemas chain in 1936.

Associated British Cinemas(ABC) took control of the cinema in 1937 and the final film show was on 14th January 1956. In May of that year the building reopened as ABC’s television studios for the Northern region (they broadcast during the weekend only). There were three studios: the largest in the stalls, a news studio in the former restaurant on the first floor and a small continuity area. Film editing and telecine was done in the roof-top former projection area.

The building was supposedly haunted by the ghost of an actor who had passed away during a live broadcast of ABC’s “Armchair Theatre”!

Film of the opening night of the TV studios can be found on the British Pathe website (search for ‘ABC tv’): http://www.britishpathe.com/

When ABC lost the TV contract for the region, the Capito Cinemal building passed to Manchester Polytechnic, which used it as the base for its theatre studies and BA (hons) Design For Media film and television production course. Actress Julie Walters was one of the drama students. During this time the stalls area was used as a theatre and the first floor studio for TV production. The circle was boxed in as a separate cinema (this may have dated from the ABC days).

It seemed that the building was in a safe pair hands. But it wasn’t so… The Polytechnic moved away in 1998 and the following year the building was demolished to make way for a characterless apartment block known as ‘Capitol Court’.

This building and its Art Deco front were due to be given the status of a listed grade two building. However the night before officials were due to examine the building a group of vandals erected scaffolding and smashed off the entire art deco frontage during the night, so there was nothing to save. It was believed by locals to be the work of the developers who were desperate for the cinema not to be listed, so they could build their flats.

Photographs and further information about the ABC television years:

2000 – This structure was the replacement, does everyone live happy ever after?!!!!!
http://www.manchesteronline.co.uk/ewm/17/lg/13.jpg

And what would have been wrong with applying to convert the building into flats if the need was so desperate?? I remember the Capitol from my time at the Poly and was sad to hear of its demolition. Appalling that these buildings are just torn down without any regard to their future use or their illustrious past.

My 1960s photos of the Capitol as the ABC Television studios are at the following links, which also include more information.