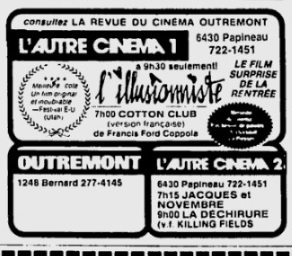 Mike Rivest’s list of Montreal theaters says that La Scala opened on May 7, 1949, and operated into 1981. The house became an adult theater called Cinema X for part of 1982, then closed and reopened again on August 27, 1982, as an art house called L'autre Cinema, and operated under that name into 1987.

Although I had already seen “E.T. the Extra-Terrestrial” in English the year before, I came to see it here dubbed in French on August 2, 1983 on a subsequent run while I was in town for the Montreal World Film Festival downtown. I also saw the Italian version, I believe at the Riviera in this same city.