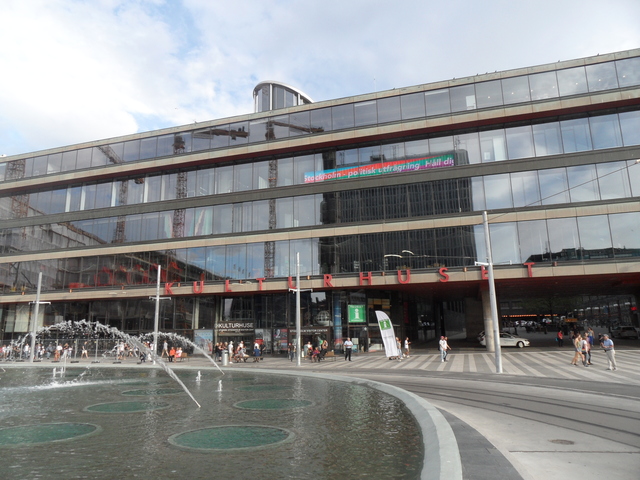 Located in Stockholm’s political and commercial centre, Kulturhuset Stadsteatern [House of Culture and City Theatre] is a large multi-purpose centre which includes a library and a live theatre, and has spaces for art exhibitions, dance, music and other cultural activities. The complex also includes shops, restaurants and a Tourist Information Centre.

The building was the vision of architect Peter Celsing, who wanted to create a space that could accommodate all art forms. “I am building for a new human being that has to come” was the pledge of the renowned architect, who won the architectural competition for a new cultural centre in 1966. The glass front of the building is intended to enhance the idea of a shared common space, and at night create a transparent view into the interior.

It is also home to a small cinema, the Klarabiografen, located on Level 2. When it opened, in spring 2006, it was the only municipal-owned cinema in the city. In January 2012, operations were transferred to circuit operator SF Bio, which ran it for three years. In April 2015 it was taken back into in-house control, with the aim of being “the hub of quality film in Stockholm”.

The cinema is equipped with state-of-the-art digital technology, including a 4k high-resolution projector. Its offerings include live events, such as live opera from the Metropolitan, lectures, press shows and seminars.