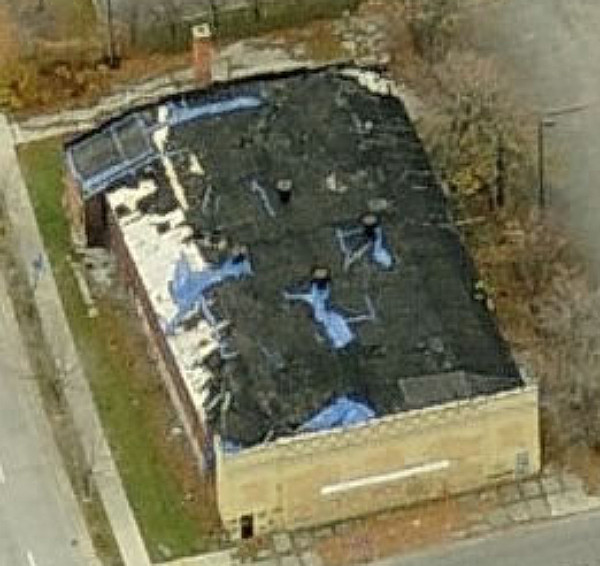 Located at 17th Street and Myrtle Street (today renamed Martin Luther King Jr. Boulevard), the Myrtle Theater was opened in 1913, and was enlarged in 1926. The Myrtle Theater closed in 1950. It became a pattern shop.

It was demolished around 2012 and the site has become a parking lot.

There is a photo on this page:
http://tinyurl.com/6qdub7

Letter: “Phantom Empire: Gene Autry, Frankie Darroâ€” Here is something different in serials. Based on the fantastic ideas made popular by the comic strips such as Buck Rogers and Flash Gordon. Started this on a hot Sunday but it is building and holding those who started it. It is well done with more plot than most serials. Just showed the third episode. The producers deserve credit for this new idea in serials and the clever manner in which this has been produced. â€"J.E. Stocker, Myrtle Theatre, Detroit, Mich"

The MYRTLE closed the same year that its original builder and longtime owner died. Jacob E. Stocker passed on at 76 on November 16, 1950. He had also been a director of Allied Theatres of Michigan, and was survived by a daughter, Mildred Toplin of Washington and a son, Seymour, of Detroit, and is buried at Cloverhill Park Cemetery in Detroit.

In the mid-1950s, the MYRTLE was being used by a pattern shop. Late in October 2010, a Karen O'Donoghue purchased the MYRTLE theatre building at public auction for $500.

It appears to be a shiny new parking lot now.

I Lived on Vermont Street from 1944 to 1956. I went to John Owens grammar school, Thomas Jefferson Junior High School and than on Commerce High School and alas Wayne State University (1960 class

I knew everyone that lived on Myrtle Street which had a name change back in the 50’s. The Karas’s a Greek family, Smiths, Two brothers that were cripple with a spinal disorder named Mitty? Hatfields (large family) Beaugards (large family) nancy, Roberta, Jean, and about three more boys. There was a drug store and couple other stores. The Richards Family lived above the stores. Four boys in that family and one daughter. Nice family I palled around with Jerry. their was Richard and Tommy don’t remember the older brother or the sister’s name. I love their mother always gave us treats when I was over playing games. Hope this helped you. We moved to the suburbs when I finished high school. I missed the old neighborhood but we finial moved to a nice new big house. Kate

englishwit – I posted a comment here but not sure what happened to it so here it goes again:

The family you remember is my dad’s family, the Richard family. My dad is Tom and his brothers were: Jerry, Bob, Ronnie, Jim, and Billie. He also had 4 sisters but not all lived in the house at the same time since there was such an age spread. I’ve heard him talk about the Beauregards (especially Bobby) as well as Mr. Abner who ran the corner store (he was very good to my dad’s family) and Jack from the dime store where my dad worked as a kid. My grandparents were Irma and Leo Richard. My grandma Irma as a fabulous baker so I am sure you were given some of her special home baked treats. 12th and Myrtle is what my dad still says. He talks about the Myrtle show all the time and what good times were had there. Well, I hope you see this comment. I’d love to know your name so I could tell my dad. He is 78 years-old now. He also went to Owen and Jefferson. My mom went to Cass Tech.