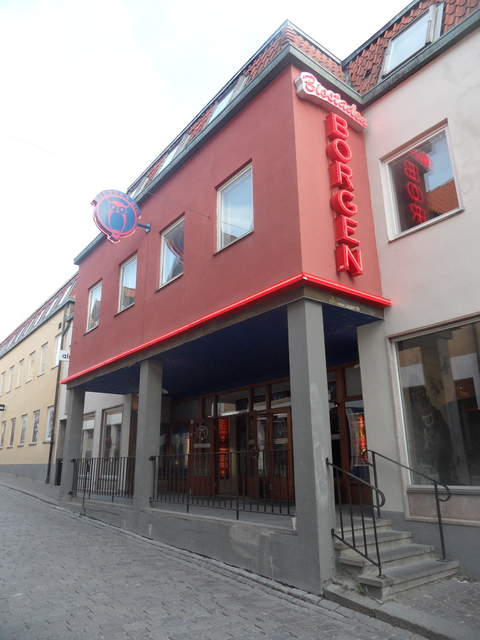 In the principal port town on the Swedish island of Gotland, the building that currently houses the Biostaden Borgen opened as a community centre in 1958-1960. It had a library, cinema/theatre, dance hall and other amenities.

At some time, the whole building closed. It was eventually acquired by the Svenska Bio circuit, which re-opened it as a three screen cinema in 2009, with the original cinema/theatre becoming Screen 1 and much smaller Screens 2 and 3 created in a downstairs area. Screen 4 was added in 2011, and Screens 5 and 6 opened in February 2018, with all three being built on the lower level, within the former dance hall.

There is a rather undefined, but undoubtedly monumental, piece of sculpture in the hallway leading to Screen 1 which, I understand, was provided by Peter Fornstam, CEO of Svenska Bio. Another nice touch is the two 35mm AGA-Baltics projectors, stationed either side of the entrance to the downstairs foyer serving Screens 2, 3 and 4, which shine a light beam towards each other across that entrance. And then there is the ‘cashier’, permanently manning, without any complaint, the former box office! (The current box office and concession stands are in a rather plain space to the right of the entrance).

Part of the original building, with its entrance around the corner, at Södra Murgatan 53, is now Bistro Borgen, a restaurant with a large back room containing pool tables and shuffleboards.