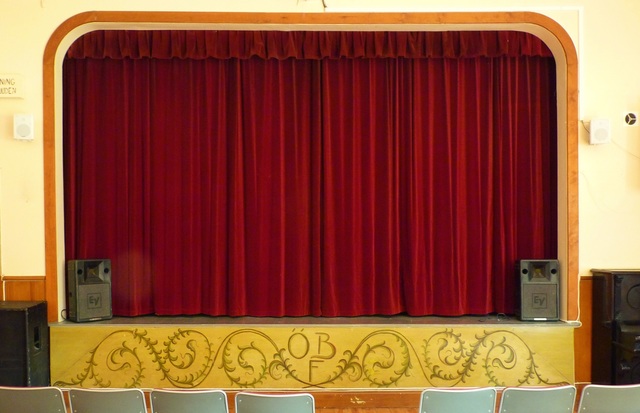 In Katthammarsvik, a holiday resort on the eastern coast of the Swedish island of Gotland, the community centre, Ostergarns Bygdegard, was originally built in 1939 by the military. From 1942, film shows were arranged using a portable projector brought from the island’s principal town, Visby.

That year, Rune Olofsson, a projectionist, visited. Cashier Tyra Karlsson sold him his ticket: they promptly fell in love, got married, and Rune stayed on, as manager, projectionist and hall caretaker, until he finally retired in 2007 at the age of 84!

In 1949 permanent projection equipment was installed. As this was, and still is, a multi-function community centre, with a flat floor and removable seating, film shows were usually only held on a Thursday. It is said that Rune only missed two during his entire tenure!

Now, regular film shows are usually only put on during the summer season, although there are occasional special event screenings, such as ‘two films with a meal’.

Rune also collected memorabilia from cinemas all over Gotland, and that is on display (in a rather cramped, haphazard fashion!) on the first floor. The collection includes the projector used in a local church in 1907 and the 1932 portable Kinofa Type 600 35mm projector used in this hall from 1942, together with many other projection artefacts and weighty ledgers detailing the films shown over the years. An Ernemann V projector, used until the digital transformation in 2012, is also on display, at the rear of the auditorium.

Also upstairs is a museum devoted to SMS Albatross, a German minelayer that ran aground nearby in 1915 after being shelled by a Russian battleship. 27 members of the crew died.

In 2008, filmmakers Margareta Garpe and Rainer Hartleb produced an affectionate 15 minute film about Rune and his love of film (his favourite was Ingmar Bergman’s “Fanny and Alexander”). When I visited, in August 2018 during a visit to Gotland organised by the Cinema Theatre Association, based in England, we were fortunate to be shown that award-winning film. Sadly, Rune has since passed away, although members of his and his late wife’s family still assist at the film shows.