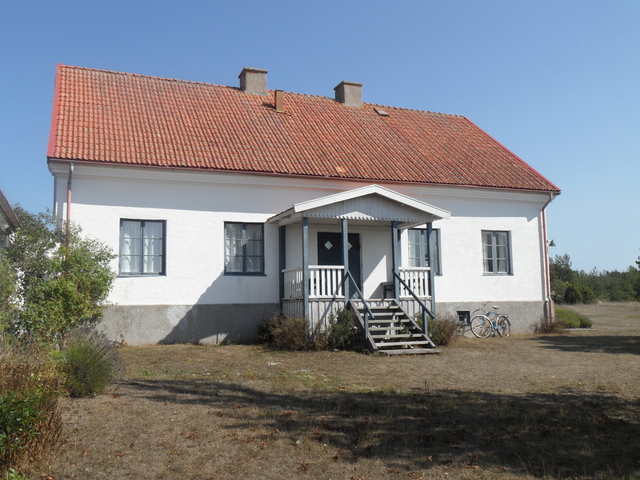 Famed Swedish film director Ingmar Bergman fell in love with the island of Faro, located to the north of the larger island of Gotland, in 1960 during an extensive search for locations for his forthcoming film “Through a Glass Darkly”.

He subsequently acquired a number of houses on the island. One of them is in the tiny village of Damba. It is a beautifully renovated farm property dating from 1854, just a few minutes’ walk from the Baltic Sea.

In 1973, for the filming of “Scenes from a Marriage”, starring Liv Ullmann and Bibi Andersson, Bergman converted a barn adjacent to this house into a modest studio. (His house can also be seen in this film.) Once filming had ended, the director, who had always wanted to have his own cinema, had it converted into the fully equipped Kinematografen, which opened in 1975.

Apparently, every year he sent a list of films he wanted to see to the Swedish Film Institute, and they duly delivered them to him. I gather that performances started at 3pm and that no one was admitted once the show had started!

Following Bergman’s death in 2007, his houses and this cinema have been administered by The Bergman Estate on Faro Foundation.

The Kinematografen is used for public screenings each year in June, during the Bergman Festival, and during the rest of the year by film students and researchers.

The screen takes up the entire wall in what is otherwise a rather plain auditorium, although one of the side walls is adorned with a lovely tapestry, which depicts scenes from the director’s films and also features Bergman himself! The 15 armchairs, on three stepped rows, are very comfortable. However, Bergman’s own favourite seat, at the end of the front row, is strictly ‘out of bounds’, and no one is allowed to sit in it!

I’ve worked in a lot of theaters & private screening rooms, but I don’t recognize those particular projectors & lamphouses. I’m curious to know what they are, if anybody here can identify the for me. Thanx!