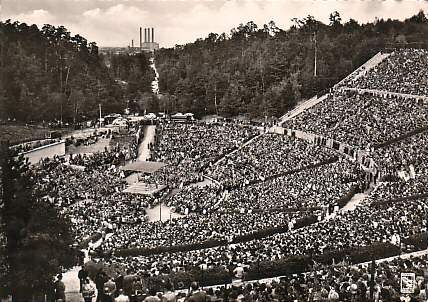 Opened in the summer of 1936 and located in the west Berlin Charlottenburg district beside the 110,000-seat (today 74,475-seat) Olympic Stadium. The huge 21,000 seat Waldbuhne (Forest Stage) is an open-air amphitheatre. It was designed by architect Werner March who also designed the Olympic Stadium.

In 1950 it was taken over by the Ufa chain and used as an open-air cinema. This was still its use in 1951. Today known as the Waldbuhne Berlin it is used as concert and live music venue.