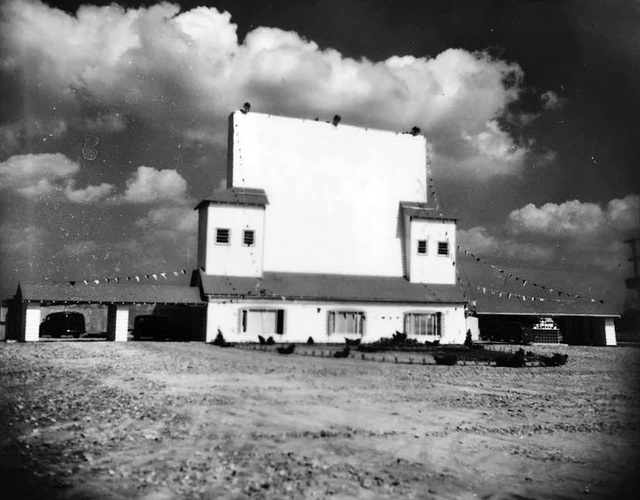 Charles R. Brinkman and hard work were no strangers. Together they had compiled an outstanding record of the construction of many new drive-in theatres and other business ventures in Ohio, Indiana, Michigan, Illinois and Kentucky over the years. Charles R. Brinkman, who was from Defiance, built and opened the Defiance Drive-In on July 25, 1947. The opening feature was “Frontier Gal” with Yvonne De Carlo, Rod Cameron, Andy Devine and shorts. This theater had the capacity for 500 cars with in-a-car speakers. The projection equipment consisted of two Mogul projectors. The screen tower measured 37 feet x 40 feet. The screen tower was built with two apartments in the base for a place for the Brinkman family to live. A concrete dance floor measuring 30 x 60 feet was put in place to allow dancing before the shows. The drive-in also had bleacher seating to accommodate movie goers without cars. Co-Operative Theatres of Ohio was the booking and buying agency for the entire time the drive-in was open.

In March of 1949, Brinkman sold the drive-in to William and Elsie Logan from Toledo, Ohio. They operated the Rollercade Skating Rink at 925 Berdan Avenue, Toledo, Ohio. Before the drive-in reopened for the 1950 season, all new sound equipment was installed which included new in-a-car speakers, new speaker posts, and new amplifiers along with new field wiring. On June 5, 1952, the Maller Brothers (Peter, Charles, George) from Fort Wayne, IN, purchased the drive-in from William Logan. They also owned at this time the Strand and Valentine Indoor theatres in Defiance. Elmer N. DeWitt was retained as the theatre manager for all three of the theatres. DeWitt had worked there since 1947. Logan said he plans a trip to California during which he will be on the lookout for a super-deluxe 1,000 car drive-in theatre lot to buy. Before opening for the May 1956 outdoor movie season, new Cinema-Scope equipment was installed and the screen tower was widen from 56 feet to 88 feet. On March 29, 1957, the Maller Brothers sold all three of their Defiance theatres, which included the Valentine, Strand Indoor theatres and the Defiance Drive-In to Jack Armstrong and Ernest Walter (dba) Defiance County Amusement Corporation (dba) Defiance Theatres Inc. (dba) Jack Armstrong Circuit.

The Jack Armstrong Circuit was a well-known theatre operator and owner in Ohio. He was a well-respected showman starting back in 1928 as a theatre usher in Napoleon, Ohio. When it reopened in April of 1958, they advertised a brand new refreshment building which was short lived. Next year on June 29, 1959, an early morning fire destroyed the concession stand and contents. The projection room was scorched also. Elmer N. Dewitt, manager estimated the lost between $25,000 and $35,000. The concession building was rebuilt before the drive-in was reopened in April for the 1960 season. In July of 1964, Neal Houtz was appointed theatre manager for all of the Defiance County Amusement’s theatres. He would retain this post until 1974. After leaving Ohio, Houtz bought the Marshalltown Drive-In, in Marshalltown, IA. Tim Nally was appointed the new city manager Defiance County Amusement’s theatres. Jack Armstrong died in July of 1974 and Carolyn Armstrong Hatch was new the CEO of the Jack Armstrong Circuit. Fred C. Lentz was the new President of the company. In November of 1978, Lentz announced the drive-in was getting a second screen tower and now would be a twin.

The Holiday Cinema which was built beside the drive-in, in 1973, was getting a second auditorium also. When the drive-in reopened for the new season on May 3, 1979 it was now a twined drive-in theatre. Unfortunately later on in the year, the 1947 screen tower was damaged by a severe thunderstorm along with part of the concession stand/projection booth on August 8, 1979. The old screen tower was condemned and on October 30, 1979, it was demolished. Selby Products installed a new screen tower for start of the 1980 outdoor movie season. In 1980, Mick Sobieck became the new city manager for the Valentine, Holiday Cinema and the Defiance Drive-In. With declining attendance and rising property values the decision was made to the close the Defiance Drive-In. The last movie to be screened under the stars at the Defiance Drive-In was on September 14, 1986, featuring “Silverado”, “Heavy Metal” and Cheech and Chong’s “Things are Tough Allover”. The drive-in was demolished and the property was sold. It is now an Applebee’s, McDonalds and Northtowne East Mall.