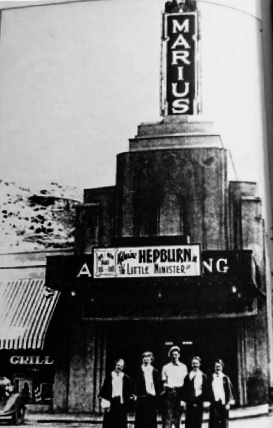 Investors Marius Miller, R. R. Winchester and Merle Alger built the Marius Theatre in 1930. Before the project was completed, Miller died and his surviving partners decided to name the theatre in his memory. The house was designed by Portland architect James W. DeYoung, and opened on August 23, 1930.

In 1940, Merle Alger gained full control the the theatre and, deciding that Lakeview would be able to support two movie theatres, built the Alger Theatre. He also had the Marius Theatre remodeled with plans by the Alger’s architect, Vincent G. Raney.

Both theatres continued to operate into the early-1960’s, but declining attendance led to the closure of the older house, and the Marius Theatre was dismantled and the building remodeled for use as offices. The building is still standing, the name Marius Building above the door the only readily visible evidence of the theater it once housed.