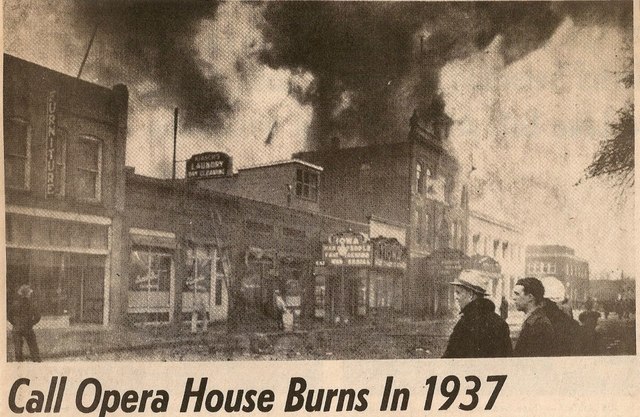 Located opposite the Courthouse. Established in 1892 by brothers Asa and Ambrose Call as a vaudeville and opera house, the opening play was “Gloryana”. In 1916 it converted to movies for the increasing popularity of moving pictures. The Call Opera House, suffered a devastating fire on April 28, 1937 from which it never recovered.

The Call Opera House in Algona IA is listed in the 1897-98 Julius Cahn Official Theatrical Guide. C.H. Blossom was Mgr. There were 600 seats. Ticket prices 25 cents – $1. Oil lamp illumination. The proscenium opening was 21 feet wide X 20 feet high; the stage was 30 feet deep. The theatre was on the ground floor. There were 6 musicians in the house band. There were 3 weekly newspapers, and 2 hotels for show folk. The 1897 population was 3,000.

The April 2, 1973 edition of the Kossuth County Advance had an article about the April 28, 1937 fire that destroyed the Call Opera House. It said that the operators of the opera house also operated a small movie house called the Iowa Theatre, located two doors north of the Call.

From the article’s description of the theater’s block of Thorington Street, the Opera House must have been the second building north of State Street, as the balcony of the theater had a fire exit door leading into the second floor of the Security State Bank building, which was on the corner of State Street. The bank is still there, but in a modern building, but the Opera house must have been on the site of what is now the bank’s parking lot. The Iowa Theatre might have been in the building now occupied by an optometrist’s office, Eyes on Thorington, at 112 N. Thorington. The address of the Opera House was probably 108 N. Thorington.