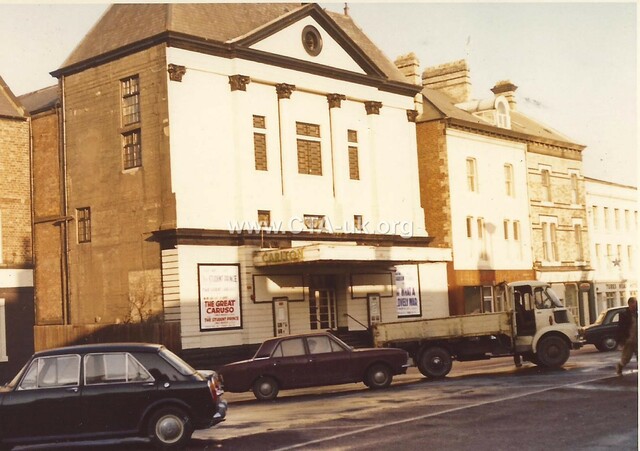 Located in Tynemouth, near North Shields, Tyne & Wear. Originally built as a Wesleyan Chapel in 1869. It was converted into the Carlton Cinema to the plans of architect Edwin M. Lawson, opening on 17th January 1935 with Jessie Matthews in “Evergreen”. The Neo-Classical style exterior was retained, but the interior was given an Art Deco style. It had a 27ft wide proscenium, and the stage was 17ft deep. It was equipped with a Western Electric(WE) sound system. It was operated by North East Cinemas De Luxe Ltd.

In 1954 it was equipped with CinemaScope. The management applied for a bingo club licence in the 1970’s but it was turned down on two occasions. The Carlton Cinema was closed on 4th September 1976 with John Alderton in “It Shouldn’t Happen to a Vet”. It was demolished in 1977 and housing now stands on the site.

The Carlton opened on Thursday 17th January 1935 (not 1936), the first film being Evergreen starring Jessie Matthews. There is, however, a slight doubt as to the closing date. Frank Manders in the Cinemas of North Tyneside gives the date as 11th September 1976, the last film being It Shouldn’t happen to a vet. I have checked in the Shields News, and although that does appear to be the last film, it was advertised as being shown a week earlier finishing on the 4th September with no further adverts appearing. I have cross-checked with the Newcastle Evening Chronicle where the last advert appeared on the 4th September, so unless anybody knows different, then I would suggest that the date that the Carlton closed was 4th September 1976. I first began making occasional visits to the Carlton in the mid-sixties. Programmes at that time usually ran for six days and would be shown shortly after neighbouring North Shields. The cinema tended to go for more upmarket fare, horror films being rarely show. One of the first films that I recall seeing there was a revival of Jane Eyre starring Orson Welles and Joan Fontaine. My impression was that the Carlton was a well run cinema, although the architect had a bit of a problem squeezing everything into the limited space resulting in a slightly cramped effect. One memory that I have of the Carlton was that at the end of the show, the besuited manager would stand in the entrance thanking patrona and wishing them goodnight, not something that I can recall experiencing at circuit cinemas.