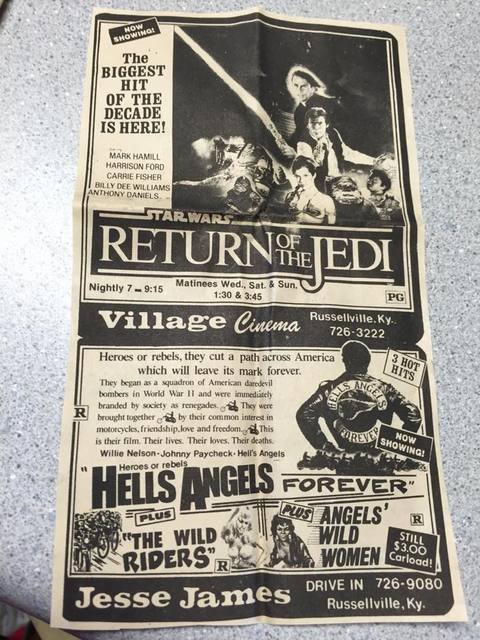 Opened around 1950 as the Logan Theatre, it was soon renamed Dixie Theatre and was operated by Affiliated Theaters Inc. of Indianapolis, IN. It was still operating in 1957. Later renamed Village Cinema which operated at least between 1978 and 1983, and shared newspaper advertisements with the Jesse James Drive-In. The building has been renovating since 1999.

This theater was at 164 E. 4th Street. It opened around 1950, possibly as the Logan Theatre and possibly as the Dixie Theatre (both names were listed in the FDY in 1951.) It has been under renovation intermittently since 1999, and still has some way to go, but a few events (mostly for fund raising) have been held in the unfinished space. It is being called the Fourth Street Theatre.

There is very little about it on the Internet, just a couple of newspaper articles with rather sketchy information, and this almost empty page at the web site of Main Street Russellville, which is the group carrying out the renovation.

Russellville had a movie house called the Dixie Theatre at least as early as 1914, and the house built around 1948-49 might have been a replacement for it. I don’t know if the new theater was on the same site as the old one, though.

Russellville News-Democrat, May 20, 1971: “A Cincinnati based firm, Holiday Amusement, Inc., this week purchased the Russellville Drive-In and the downtown Logan Theater … from Charles Bowles, whose theaters have been plagued by fires during the past year … Fred Douglas, general manager of the company … announced that the downtown theater will be completely re-worked with new chairs, carpeting and air-conditioning added, and will reopen this fall. A new front will be constructed on the building … Last summer the drive-in screen was damaged by fire and this winter the downtown location was the scene of an explosion-fire which heavily damaged the facility.”