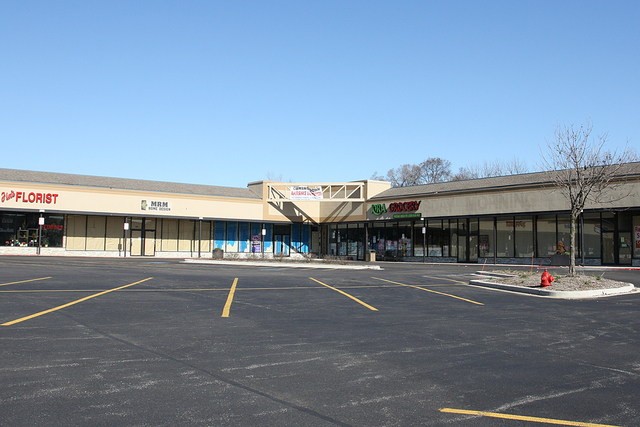 Located in the Villa Oaks Shopping Center, this cinema was opened on July 1, 1977 as a single screen. It was later twinned. It was a venue to see second-run and X-rated movies. This cinema closed in 1986 and has been demolished.

Some of my absolute fondest moviegoing memories were born at the Villa Oaks theater in Villa Park!

The theater was a true grindhouse, situated in the corner of a strip mall (I believe a crafts/fabric store now resides in the space the theater once occupied). As stated previously by another user, there were two screens at the theater: the one on the right showed a steady rotation of porn flicks, the one on the left featuring a weekly offering of horror, sci-fi and martial arts flicks. Since I was in my teen years when I frequented the Villa Oaks, needless to say I never had the opportunity to take the right hand path (so to speak), but I can definitely share with you my memories of the “left” theater and my experiences there.

As a resident of Villa Park growing up, many times I would walk to the Villa Oaks on sweltering summer afternoons during school break. I can clearly remember paying for my ticket and stepping through the glass storefront doors to the theater property and being instantly struck with a noisy blast of air-conditioning. Inside the theater property, you had to walk down a poorly lit corridor towards the actual theater (which was especially dark to my maladjusted eyes, still blinded by the sun). At the end of the corridor and to the right, just before the double doors to the theater, was the concession stand- brightly lit with fluorescent lighting. Strangely enough, I cannot remember a single occasion where I saw someone actually working the concessions (or when I ever purchased a snack), but the hallway (and the theater itself) always seemed to carry an odd, but not unappealing, aroma of caramel corn.

Once you passed the double doors at the threshold of the theater, I was dwarfed by the Villa Oaks sizable movie screen and was always impressed by the overall cleanliness of the theater. The decor was a dark blue motif: simple and unassuming, with comfortable vinyl seats that absorbed the facility’s air-conditioning with a chilly grasp. There was never any ambient music playing prior to showtime, and rarely were there any other patrons in the theater being entertained along with me. It actually surprised me that the Villa Oaks lasted as long as it did. I can only assume that the business at the right side theater was far more robust than the one on the left.

Still, I have very warm memories of seeing such films as MAD MAX, PHANTASM, PROM NIGHT, DEMONOID, TERROR, BATTLE BEYOND THE STARS, DEATHSPORT, THE OCTAGON, THE AWAKENING at the Villa Oaks and often wish I could hop into a time machine and venture back to those wonderful days of movies once again.

Maybe I would even buy a snack this time.

I too saw both regular and adult films at the Villa Oaks. It was well kept. At times there could be some weird people frequenting the adult side. Heck I can remember seeing a regular movie on one side then going to the adult side to see another! It was the best of both!