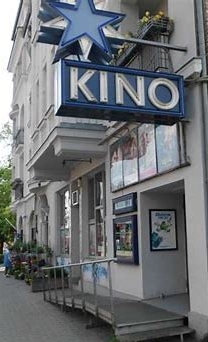 Located in the Orangereipark area of the Pankow district to the northeast of the city. The building was constructed in 1870. Bismark Litchtspiele was opened in 1933 as a 250 seat single screen cinema. In 1946 it was re-named Blauer Stern. It was closed in 1989 and was still closed in 1995.

In 1996 it re-opened following a renovation and twinning with seating capacities 165 & 74 and playing art house films. It was taken over the the Yorck Kinos chain on 1st May 2018. In early-2021 it was renovated to the plans of architectural firm Batek Architekten.