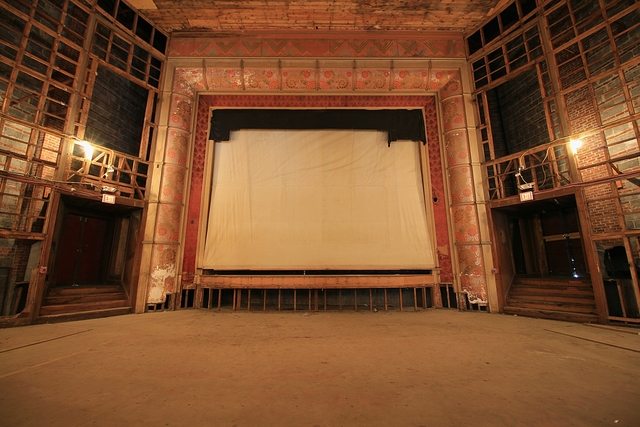 The Mohawk Theatre opened on November 5, 1938 with Deanna Durbin in “That Certain Age” & Joe Penner in “Mr. Doodle Kicks Off”. It was closed in 1991. There is an effort underway to begin planning a restoration of the theatre into an arts center over the next two years. First, however, there is the task of raising the estimated $3.5 million needed.

From the 1960s a photo postcard that captured a view of the Mowhawk Theatre in North Adams.

Went by this recently on a bicycle trip. There was an event for late July on the marquee. Apparently it’s in use. The doors have no handles on the outside, though. I will post a marquee picture and the mural on the back of the stagehouse.

A brief item about E. M. Loew’s Mohawk Theatre in North Adams appeared in the lower right corner of this page of the April 29, 1939, issue of Boxoffice. There is a photo showing one side wall of the auditorium as seen from the top of the balcony.

The item notes Mowll & Rand as architects, but attributes the decoration of the theater to William Riseman and someone named Alec Lercari (who I can’t find mentioned anywhere on the Itnernet, so perhaps it is a typo.)

My friend came up with an idea that I’d like to pursue. If there’s plans for the future of the theater, then it may not work out but the idea is to open an alternative movie theater, where we show non-standard films, either indie movies or older films at a low price on Fridays and Saturdays.

If I could at least break even, I’d do it just to put the theater to use and give the people in community something to do every week without breaking the bank.

I work for Elwood Cinemas in NY and so daily do a bit of research on old theatre pictures to share with our patrons and found this great one of the Mohawk Theatre but the date said 1933. After a little research I found this great article on Carole & Company Blog where the research into the discrepancy was done for me. Thought folks might be interested in this! The picture is embedded in the blog post.

The theater is largely gutted, except for the lobby and the plaster surrounding the stage. The current owner has plans to restore what he can and return the building to use.

Worked as a substitute projectionist there through the 1970s. The theater had two Super-Simplex projectors and Brenkert carbon-arc lamps. It was fully set up for synchronized projectors with Polaroid’s 3D system, though I never saw that system in actual use there. It was the main roost of Jim Coddaire, then Business Agent of the local projectionists' union, and something of a curmudgeon.

The actual opening date is November 5, 1938 with a double feature: Deanna Durbin in “That Certain Age” and Joe Penner in “Mr. Doodle Kicks Off”, along with the latest reel of March Of Time.

From 2022 Google street and aerial views it looks like the theatre was demolished and replaced by a Holiday Inn.

It wasn’t. You’re just looking in the wrong spot.