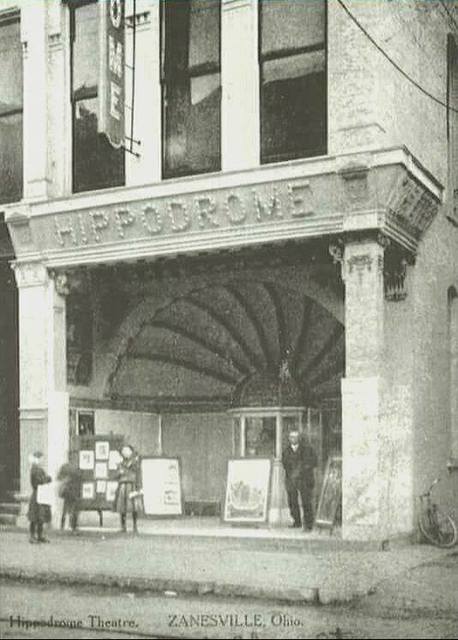 The Hippodrome Theatre was opened on March 11, 1909 and was still operating in August 1916. By late-1917 a shoe store was operating at this address.

The Hippodrome was mentioned in The New York Dramatic Mirror at least as early as the issue of August 14, 1909, which reported that the theater was “…doing well with moving pictures, playing to capacity houses daily.” An ebay seller had a postal cover of an advertisement mailed by the Hippodrome, postmarked February 28, 1910. The manager at that time was named W. E. Deacon, who was also mentioned in the May 21, 1910 issue of Dramatic Mirror as the manager of Zanesville’s Schultz Opera House. The July 15, 1910 issue ofThe Nickelodeon had this item:

“W. E. Deacon, of the Hippodrome, of Zanesville, has greatly added to the attractiveness of his already popular house by the installation of a mirror screen on which the pictures are thrown with a marvelous distinctness so that every movement and expression is clearly visible to the audience, and without any flickering so tiresome to the eyes.”

The December 13, 1913 issue of The Moving Picture World published a letter from the Hippodrome’s then-manager, Helen Morrison-Lewis, who said she had been running the house for a little less than two years. The Hippodrome was still advertising in Zanesville’s daily paper, The Times Recorder, in August, 1916, but I’ve found no later ads. By late 1917, the paper was running ads for Geist’s Shoe Store at 320 Main Street.