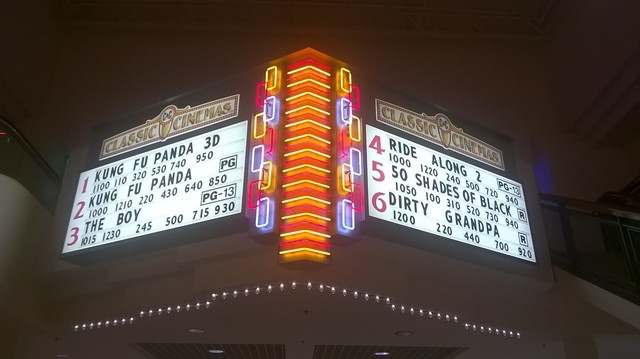 This theater was opened November 9, 1990 by Cineplex Odeon. It is located inside the North Riverside Mall right above the mall’s food court. The theatre’s popularity caused the nearby GCC Harlem-Cermak Theater to lose business and close down.

In 1998, the theatre became part of the Loews chain after Cineplex’s merger with Loews. After Loews was acquired by AMC, the theatre very briefly was under AMC in early 2006 before being taken over by the local Village Entertainment chain.

In October 2008, the Classic Cinemas chain reopened the theatre after completing a remodeling project that included digital sound in all six auditoriums, new restrooms, new paint and carpeting and a new box office.

I just went to see “The Express” at the North Riverside Theatre. Here’s are the pros and cons as to what Classic Cinemas did and did not do as to what renovations were done:

Pros:
>> New box office.
>> New concession stand.
>> Self-serve butter for your popcorn and self-serve fountain for soft drinks as well as free refills on all size popcorn and soft drinks.
>> Reasonable ticket prices
>> Digital sound quality is fantastic – goes back to when Cineplex Odeon had install digital sound in 1993 when that first film was “Jurassic Park"
>> New rest rooms.
>> New carpeting – the Cineplex Odeon zig-zig carpeting is gone.
>> All 6 theatres have been painted was well as the theatre doors

Cons:
>> No upgraded seating.
>> Cineplex Odeon logo still shows at the theatre entrance by the stairs and escalator was well as the mall entrance (on Cermak Road) leading to the upper level parking (with the expection of the one in the outside marquee).

I find the turn of events as it relates to this theater very interesting. I have not been here in almost 10 years, and the place needed work then. jimpiscitell, you said the theaters were repainted. What were the floors like? Did they do anything new on the inside of the theaters? I remember the seats in the old cineplex theaters being not very comfortable (although 600 N Michigan had good seats when I went there last year). I bet if they make enough money, the seats may gradually be replaced.

It’s interesting to hear what changes were made to the theater by Classic Cinemas in the space of a month while Village did none of the above for over 2 years (For selfish reasons, I’m bummed they replaced the carpeting. As a nostalgia freak, I liked that at least one theater still had the old CO zig zag design)! Everything sounds like an improvement that Classic has done, and as long as they make money off it, I bet the cons that were listed will be addressed. Why put money into new seats and signage if there’s no money being made? I think with the modifications done and especially the discounted tickets, this place has a chance to thrive again. It doesn’t seem that long ago when this place pushed the old Harlem-Cermak out of business simply due to the fact it was IN the mall. You couldn’t ask for a better location for a mall theater. It’s right in the thick of things which creates a lot of impulse business. I think a combination of the clientele and poor management (let’s not exclude AMC for their share of the blame, this place deteriorated long before Village took over and I largely blame them for letting the Norridge deteriorate to the point that it will be closed after 40+ years in busineess) brought this theater down. Let’s hope Classic Cinemas can breathe new life into it! I wanted to visit this theater while it was owned by Village to see what changes if any were made to a theater I grew up going to quite a bit, now with Classic Cinemas stepping in, i’m even more interested!

PS-I hope they keep the signage as is! That Cineplex logo is a time piece!

So the auditoriums don’t look like this anymore?
http://www.flickr.com/photos/bwchicago/1368935125/

Pretty soon I must get over there and check things out.

To Cinemarkfan: The walls are painted a blue-green color. The theater doors have been painted red.

To aek16: The carpeting is black with gold square design. You are correct that they should keep the Cineplex signage as a momument. Hopefully once they make money, they will replace the seats and possibily add digital projection as I talked to the manager about the digital sound.

It looks like the North Riverside may actually be the only cinema ever to make it out of Village Theatres/Entertainment (whatever!) alive! It appears that the Visionary (ex Village North, exx 400 Twin, exxx 400) is closed as are the Lincoln Village and the Glenwood (their telephone numbers are all disconnected). Although the Bloomingdale Court is now a FunAsia Theatre and rumors have been bandied about concerning the Golf Glen re-opening as a bargain house.

Drove by this theater a couple of weeeks ago. All Cineplex signage is gone having been replaced by Clasic Cinemas logos. The thetaer must be doing okay under it’s new management, but a part of me is sad that there’s even less evidence of cineplex left-

This has to be the worst theatre I have ever been in, and I was in the Berwyn near it’s end, so you know this one had to be bad. North Riverside was a beautiful mall when it opened in 1975. At that time, the cineplex did not exist. A “remodelling” (I use that term very loosely)of the mall in 1989 completely ruined it. It looked like a reject soundstage from “Miami Vice” (which was already out of style by this time, seeing as the show went off the air in ‘89). The theatres looked flimsy and cheap. Uncomfortable seats. The projection, and sound was mediocre at best. My wife and I saw a few movies there, but when we were accosted by some “city teens”, and my wallet was almost lifted (thankfully, the punk was a poor pick-pocket), we said forget this place. Another suburban theatre goes to Hell. And this was when it was still owned by Cineplex-Odeon! We haven’t been back in 10 years, and we will never go back. I don’t care who owns it.

Wow, talk about a narrow minded individual! I’m sure Classic Cinemas does a great jot of running this theatre, but you will never know I guess.

I was inside the mall for the first time in years a few weeks ago and took a peek inside at the lobby. My friend did me one better and walked right into the lobby (it was afternoon and we weren’t planning on going to a show). We looked around at the modifications and it’s largely the same as I remeber albeit new paint and carpeting. The concessions moved across the lobby from where they were and they have a fill station for popcorn and soda where the old concession stand was.It was good to see one of my childhood theaters still in business though it did look a little aged. Hopefully Classic will make a go with it. BTW, all Cineplex signage is gone. I guess all that’s left CO wise I think is Rivertree Court which I plan to see soon. All in all,the mall and theater seemed better kept up then I remember upon my last visit.

This opened on November 9th, 1990. Its grand opening ad can be found in the photo section for this cinema.