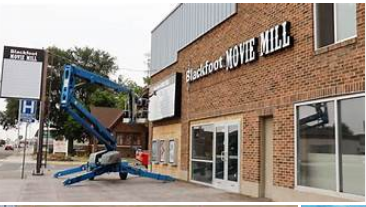 Kent and Ingrid Lott, known for the Centre Twin Theatre and Paramount Theatre in Idaho Falls, expanded their reach with the opening of the Blackfoot Movie Mill. On opening day November 9, 2018, “The Grinch" on three screens and “Venom” on a fourth screen were filled to near capacity.

Kent notes he designed the 7-screen, 1,035-seat stadium theatre, which was built inside the gutted Blackfoot Motors, a building dating back to 1932. The cost of renovations was thirty-percent of what a new building would be. Individually, the auditoriums seat 190, 165 (3), 130, 125, and 95. The theatre has 7.1 factory QSC certified sound, reportedly the first in Idaho, and Barco laser projectors.

Starting November 3, 2017, Kent put weekly video updates on the theatre’s Facebook page, which followed the construction. One video explains the demolition of a 120-year-old barn, which was replaced by the largest auditorium. When the walls were opened more than 23,000 pounds of sawdust, used for insulation, came out and the wood was recycled to build cabinets for the theatre. Also reused was the marquee from Blackfoot’s old Plaza Twin Theatre and poster frames from the closed Carmike in Chubbuck.

On Halloween an open house was given to the community and an estimated crowd of 2,000 showed up to walk about and enjoy the trailers. The Blackfoor Movie Mill has on-line reserved seat ticketing and 25-cent candy for the kids, frozen treats, and hot food such as nachos, hot dogs and pizza.

According to the Morning News, the Lott’s history in the movie business dates back to the early-1990’s when Kent was with Mann Theatres in Salt Lake and Idaho Falls. They later managed the Center Twin Theatre and Paramount Theatre, which was purchased in 1993 and 2000 respectively.