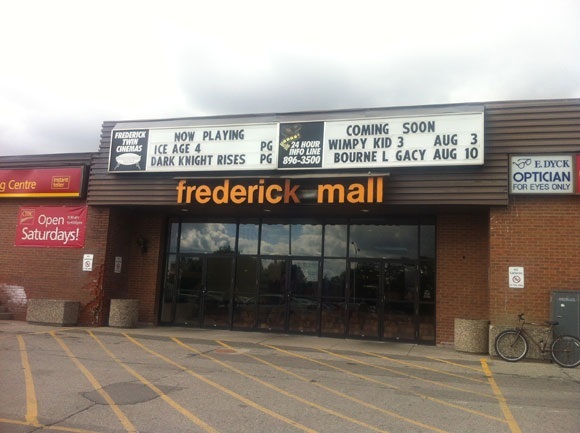 When I was a young teen I used to go to the arcade that was oposite the ticket booth in its own small room.I remember playing Asteroids there in the late 70’s and early 80’s.It was the closest Arcade to where I lived.I did see a movie there in the early 80’s called “The Fish That Stole Pittsburgh"It was a cheezy movie that I recently saw on TV.The theatre was down a set of stairs at the north end of Frederick Street Mall and was opened when the mall actually enclosed itself to provide indoor tenants.I was there for the first time in over 20yrs last summer to see Robots.I swear it still has the same seats.Its a no thrill theatre now with a small selection of food and beverages but has the cheapest prices in town.

Great First run theatre that throws back to the 80’s. Independently run, the Frederick Twin features 2 screens with reasonable concession prices and admission (Currently $6.50 general admission with $4 Tuesdays!) Another highlight is a large picture window into the projection booth so you can see the projector and platter system. The theatre is dated… looking like a Cineplex from the late 70’s/early 80’s… but that just ads to the charm. Talking to the staff, it is rumoured that they may switch to digital by the end of 2012. Note that they are cash only (there is an ATM on site) so they can keep their overhead low. They also feature a few arcade games in the lobby. The only setback is Screen #1 is the smaller of the two screen and has poor sound and appears to project on just a wall painted white. Fortunately most of the popular features are on Screen #2 (the larger theatre and screen.) Again, you can’t beat the price for first run movies in Kitchener.

The Frederick Twin has been sold to new owners that plan to perform some renovations/upgrades. http://www.therecord.com/news-story/4030238-new-owners-plan-makeover-for-frederick-twin-cinemas-in-kitchener/

The Frederick Twin was built and operated by Premier Theatres who dominated Kitchener/Waterloo. They were affiliated with Famous Players Canadian Corporation.

The Frederick Twin has had all of the seats replaced and installed digital projectors for both cinemas as of Summer 2014. Still showing first run films at discounted prices.

The Frederick Twin Cinemas is now part of the Imagine Cinemas chain, which took over in 2014.