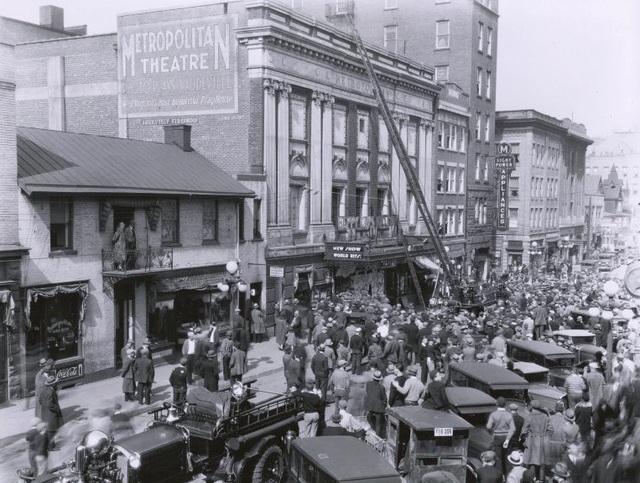 In 1914 the American Motion Picture Directory listed the Hippodrome Theatre at 367 High Street. The Metropolitan Theatre originally opened in 1924 with 1,300 seats. It is currently open after extensive renovations. In now has a state of the art sound and lighting system and a small portable screen for movies. We are slower in the summer due to lack of funds to purchase a chiller for the air conditioning system. Please check the Met Theatre website or BOPARC.org for schedules of events. We continue to seek donations and grant monies to complete the theatre’s complete restoration.

Appears to be dormant – website very outdated. Is it still open?

The Met is still in use by West Virginia Public Theatre. They presented their production of Mary Poppins November 29-December 21, 2004. Their summer season begins July 8, but no production has yet been announced.

The July 24, 1964 issue of the Morgantown Post ran an article about the 40th Anniversary show at the Metropolitan Theatre, to take place that evening with a presentation of the 1924 silent movie “Blood and Sand.” A piano would substitute for the organ, dismantled in the early 1940s, which had accompanied the movies in the theater’s early years. The Metropolitan had regularly featured Keith-Orpheum vaudeville acts in its early years, and the house survived being gutted by a fire in the early 1930s

My collection of photos and ephemera related to this theatre: https://www.flickr.com/photos/nessachan/albums/72157624883300618