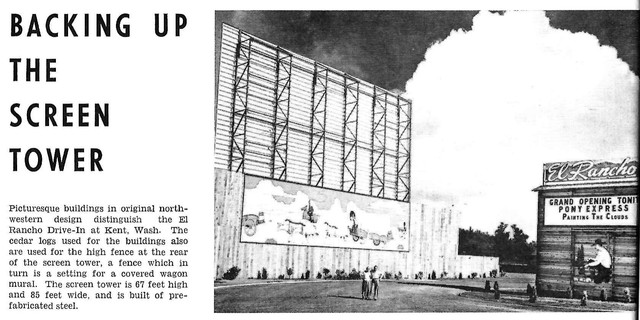 The El Rancho Drive-In was the trashy drive in we all used to go to in high school to see Clint Eastwood or monster movies and make out in the back seat of the car. The marquee out front featured a huge cowboy and it was one price per car load.

Originally opened in 1954, it was demolished and replaced with warehouses in the late-1660’s, but the Lombardy poplars were not all cut down and some of them are still visible between the tilt-up warehouses!

In the 1970s we called it the El Rauncho because the place was so raunchy. On Thursdays it was $2 a carload, so we’d cram six or eight kids in a car. There’d be triple bills &amp sometimes they’d show FIVE films so that the last film was playing as the morning sun was rising. The third, fourth, &amp occasionally fifth film would be like 64-minute monster cheapies & we could almost never stay awake for the last one. I can remember only once being awake enough for the very last film, & it was a badly dubbed European (possibly Russian) science fiction film with a crazy story that probably had nothing to do with what the story was in its original language. It was so bad that after that I never even wanted to try to stay for the last film. www.weirdwildrealm.com

Everyone called this theater “El Cheapo” because of the carload admission price. It was a great place to go when you were broke and you didn’t want to hide anyone in the trunk! Most of the other drive in theaters, south of the Space Needle, played 1st or 2nd run movies and they checked trunks!

I can’t remember ever eating anything from the snack bar. I heard stories that you could get poisoned if you went into the snack bar.

This theater was between Renton and Kent on West Valley Hwy (84th ST). It provided the perfect neutral ground for high school kids from these towns to have a fight.

After seeing my comments, is there any question why this drive in was closed and demolished earlier than most other drive in theaters of it’s time.

A correction for the commentator who thought the El Rauncho was torn down in the 1960s. It closed mid-August 1979, & I’m unsure how soon thereafter it was torn down. The last films it ever showed were “Love At First Bite” with “Old Dracula.”

When it first opened in July 1954 it was the first theater in the region that provided both Stereo & Cinemescope widescreen, so it was briefly state of the art, even though it got run down more quickly than any other outdoor screen. The first doublebill it showed was “Pony Express” with “Painting the Clouds with Sunshine,” which were by no means new movies, so it was down-market from the start. The original owners were O. L. Chinquy, Elton Fay, & Lloyd Honey. www.weirdwildrealm.com

The El Rancho was featured in an illustrated article in Boxoffice of October 2, 1954. The style of the theater was Rustic, all its buildings being built of cedar logs and having cedar shake roofs. A photo of the concession stand showed the employees dressed in western outfits, with cowboy hats. The drive-in could accommodate 575 cars.

Boxoffice didn’t give the name of an architect, but said “The El Rancho was engineered and is being managed by Oscar L. Chiniquy who has spent 20 years with National Theatre Supply and has devoted a lot of time in advising others on how to build.”

The article gave the names of Chiniquy’s partners as Fay Honey and Lloyd Honey. Boxoffice and its predecessor Movie Age frequently mention Fay Honey, as far back as 1929 and into the 1950s. His son Lloyd Honey died in 1977, and his obituary appeared in the May 2 issue of Boxoffice that year.

The February 5, 1955 issue of Boxoffice said that Oscar Chiniquy had sold his interest in the El Rancho to William Foreman and associates.

My dad Robert â€œBobâ€ Reynolds was manager of El Rancho Drive-in in 1954 and 1955. Dad moonlighted from his day job as a precision machinist model-maker for the Boeing wind tunnel. He was not involved in the grand opening. Our entire family worked at the theater. My mother, Lillian â€œEnidâ€ Reynolds, was the snack bar supervisor. She oversaw the snack bar staff. As a newly pubescent guy I had crushes on the farm-girls who worked behind the counter. My brother Robert â€œDustyâ€ Reynolds was one of the cashiers. He was a student at Highline High School. Iâ€™m Frank â€œTankâ€ Reynolds and I worked the snack bar in addition to being the groundsman. I was in charge of maintaining and replacing broken and â€œstolenâ€ speakers. I was a student at Puget Sound Junior High. My brother and I were both members of Local B22 of the Theatrical and Stagehands Union. With union wages and long hours we were two of the richest kids around. My brother and I and a hired hand cleaned up the theater during day. I also mowed the grass on a sit-down mower. My brother and I â€œsetâ€ the marquee every week. The marquee was a two-story free-standing rustic structure. Dad, ever the promoter, raffled a car that was only guaranteed to be driven off the property. He also had a mason build an enormous brick barbeque in the patio in front of the snack bar to advertise the custom one that one lucky customer would win in a raffle to have built at his home. Our family used the barbeque to make dinner before we opened and for breakfast after our all-night shows. I have to state that my mother was a stickler for cleanliness and I can assure anyone who ate there had hygienic, spotless and carefully prepared food service. The Honey chain of theaters which included the Duwamish Drive-in did not understand the rural sensibilities of their loyal patrons, many of whom were families who came every week. One week they booked â€œGarden of Edenâ€ a nudie film at the El Rancho. After a family council it was agreed that I could work that week. Since it was the â€œAâ€ film my groundsman job required that I be on duty through both nightly showings all week long. I was the envy of my junior high school friends. I got pretty blasÃ©â€™ by the end of the week.

The only thing I remember about this drive-in was that the playground in front of the screen was covered in ton of sawdust. I guess it was there to keep the kiddies safe from falls, but it looked like the equipement was sinking into the ground. The ground clearance of the swingset was about a foot! If you drive the 167 freeway between Renton and Kent, you can still see the tall trees marking its location.