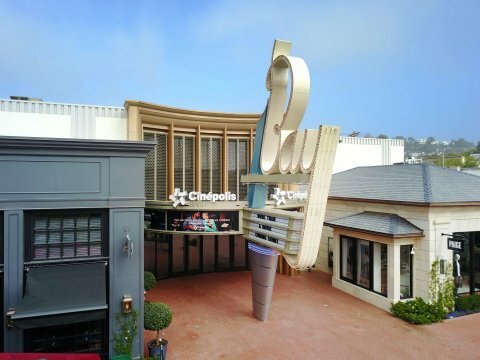 Designed by Retail Design Collaborative, formerly Perkowitz+Ruth, one auditorium in the 5-screen, 250-recliner cinema is equipped with a 35mm projector for private screenings. The Los Angeles Times noted the largest auditorium seats 75 while the smallest hold 28.

As with all Cinépolis' the cinema has a lobby bar and in-theatre dining. To Palisadians familiar with Swarthmore Avenue, Cinépolis sits approximately where Mort’s Deli, with a celebrity following, was located until it closed in 2007. The Village Pantry, Steve’s and then Lenny’s Deli later occupied the space.

Before leveling the 1960’s shopping area Rick Caruso retained Elkus Manfredi Architects to design the $200 million Palisades Village. The Cinepolis Pacific Palisades was taken over by Netflix in October 2021 and reopened on October 22, 2021 with “The Harder They Fall”, “Vivo” & “The Mitchells vs. The Machines”. The 35mm projector which was installed by Cinepolis will be retained. 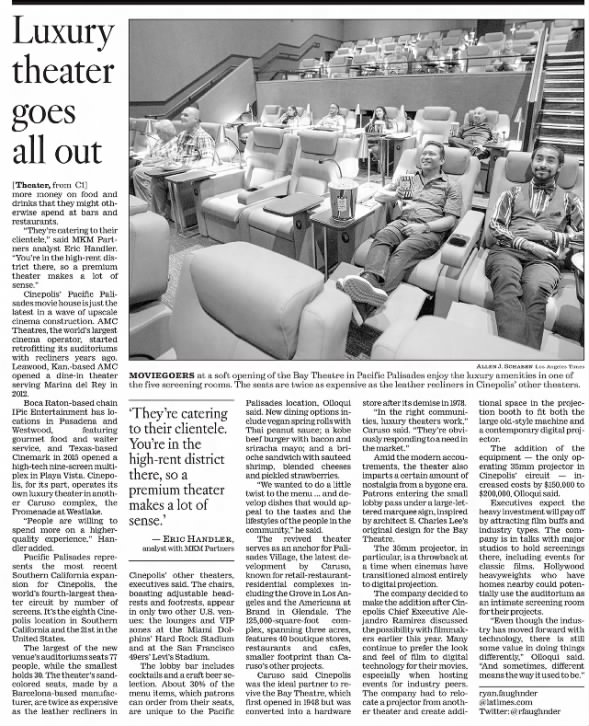 Nice that they re opened but please such small square flat screens and very little seats. Probably no masking. It should just have been a 2 or 3 plex with larger curved screens and way more seats. All about food and drinks plus over large sleep chairs. I wonder If someone will take over the old Bay Theatre in town if It’s still around and bring in more seats and a larger screen. The movie people in this town have a ton of money to spend on a nice wide screen movie house not some cramped small five screen set up. The new neon sign does look nice.

Theatre ticketing is thru Atom Tickets

Saw “Operation Mincemeat” there today. My friend and I had theatre 1 to ourselves. They seem to have a deal with Netflix to show their product. The theatres and screens are on the smaller side, yes. The seating is comfortable. The staff are nice.

Also, this page says that there are no theatres to be found within 30 miles, which is untrue. The theatres of Santa Monica are only 5 miles away.