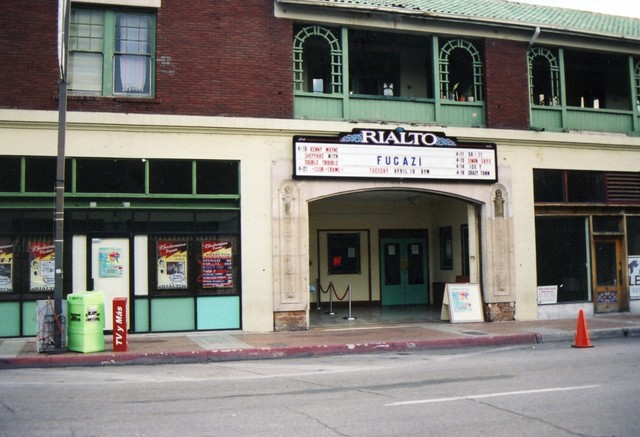 The Rialto Theatre was opened August 29, 1920. By the early-1940’s it was operated by Paramount Pictures Inc. through their subsidiary Harry Nace. It was renamed Paramount Theatre on August 22, 1948. Closed due to a major gas explosion in 1984. Under renovation since 1985, and currently an active performing arts center. Friends of the Rialto Theatre are working to bring this theatre back to it’s former glory.

An extensive history of the theatre is available at the official website.

There are 12 photos on this page from the CA State Library:
http://tinyurl.com/2s9966

That information from the National Register of Historic Places interesting. I was not aware that Alexander Curlett had ever designed a theater. It must have been a solo work, too, as his father William Curlett, his former partner, had died in 1914.

The Rialto must have been his last, or nearly the last, project he designed before he formed his partnership with Claud Beelman, as everything else I’ve seen of his from 1920 to 1928 is attributed to Curlett & Beelman. The impression I’ve gotten from various sources has been that Aleck Curlett was the less talented member of that firm, but the Rialto is a pretty impressive building. Maybe he had more to do with the designs of the great Curlett & Beelman projects of the 1920s than I’ve been led to believe.

Now I’m wondering if some of the still-unattributed theaters around the southwest from the late 1910s might have been of his design.

Curtis McCrary of the Rialto Theatre held a a special vigil in honor of Gabrielle Giffords, John Roll and the other victims of the recent shooting in Tucson AZ tonight at 7:30. The marquee gave a message of hope to their Gabby.

From their website gallery, much of the original decoration in the lobby and auditorium is gone, replaced by modern décor.

…also the seating has been removed, and the smooth sloping floor has removable folding chairs.

Opened as Rialto on August 29th, 1920. Grand opening ad in the photo section