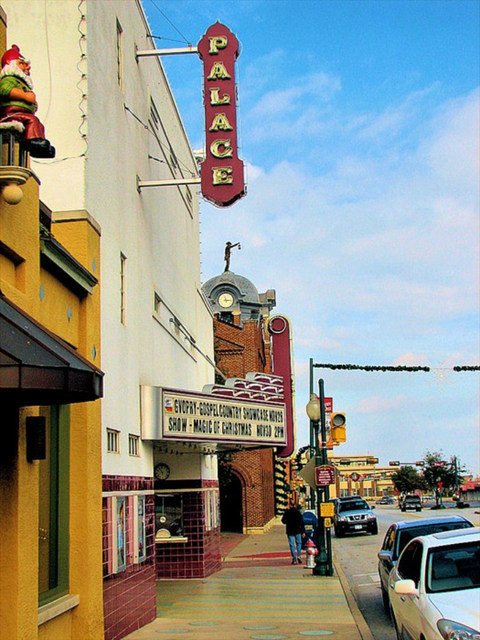 James Kirby Buckner built the Palace Theatre in 1940 for $25,000. The theatre held its Grand Opening Thursday night, November 21, 1940 with the motion picture “My Love Came Back” starring Olivia De Havilland. Seating capacity was 473, including 22 loveseats, and 130 balcony seats. Ticket prices were ten cents for adults and five cents for children. In 1966 it was renamed Airway Theatre, and in 1971 & 1972 operated as The Flicks. In 1974 it became the Air-Way Theatre, but this was only for a short while. It then became the Grapevine Opry which operated until 1985.

Alive as a center of cultural and civic activity for Grapevine and all Northeast Tarrant County, the Palace Theatre Arts Center is the place to celebrate music, theatre, dance, cinema, and the visual arts. It will be a place to gather… for special events, civic meetings, private parties, entertainment for all ages … and more.

The 57-year-old, 439-seat Palace Theatre has been reborn, its original Art Deco style details brought back and its technical facilities, audience amenities and backstage spaces expanded to attract and present the best in live performance and film programming for families from across the region.

Meanwhile, the adjacent historic Buckner Cash Grocery Building (ca. 1930) has been transformed as an additional performance and meeting facility accommodating up to 180 for a noon luncheon program and 200 for an in-the-round theatrical performance that evening.

The Palace’s deep dedication to increasing educational opportunities in the arts and improving and expanding the accessibility of performances to wider audiences are essential keys to the Grapevine Heritage Foundation’s commitment to the preservation, restoration and renovation of this revered Grapevine landmark.

A 2009 view of the Palace Theatre in Grapevine.

Thanks for the link, Lost Memory.

Thanks for the photos, Lost Memory. Are there any photos of the interior of this particular theatre, or nighttime photos? Just curious.

Valley of the Giants from 1942 and a double feature, The Kid from Texas & Redhead and the Cowboy from 1951 featured at the Palace in Grapevine.

It looks like th eplace might have temporarily been The Airway in 1971? Check out this news story from WFAA, preserved by SMU. https://youtu.be/KfN2NslhZ_8

The Palace was renamed the Airway in 1966, because of the DFW airport which had started construction near the town. It was renamed “The Flicks” when it was run by high school students in 1971 and 1972, and reopened one last time as the Air-Way briefly in 1974, before ending its run as a movie theatre and morphing into the Grapevine Opry for the the next 10+ years.

The 1940 version of the Palace actually seated over 650 people: 473 on the main floor and 178 on the balcony, which had a wall dividing white from black patrons. The current configuration seats about 410 because the stage and screen area was enlarged and pushed forward.