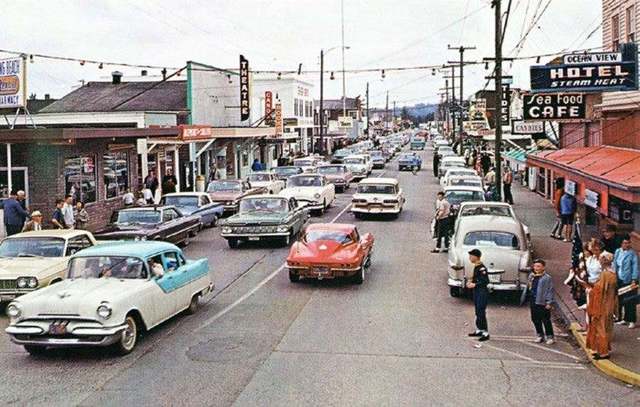 The Row Theatre was opened in August 1917. It was renamed Sunset Theatre prior to 1926. By 1956 it had been renamed Long Beach Theatre. It was still in operation in 1964. It was demolished in 1974. Cottage Bakery now occupies the site.

This Facebook page has a 1934 photo of the Sunset Theatre. The accompanying text is from an interview with Jack Williams, long-time owner of the house, who also operated the Ilwaco Theatre in Ilwaco.

Another Facebook post is about Walter Strauhal, who owned the theater before Williams. It says that the Strauhals “…took over the old tent showhouse in 1910, replacing it with a building that became known as the Sunset Theater, and later as the Long Beach Theater….” Long Beach Theatre was the final name of this house. A June 26, 1956 Boxoffice item about Williams closing the Ilwaco Theatre said that he intended to focus on running his Long Beach Theatre.

It appears that the Sunset had opened under a different name as well. An item datelined Long Beach in the August 4, 1917 Moving Picture World said “C. B. Strauhal has opened the Row theater.” I’ve found no indication that Long Beach (or the Strauhals) ever had any other theaters, so the item must have been about the house that became the Sunset/Long Beach. The second Facebook page says that the building was demolished in 1974, but doesn’t say when the theater closed.