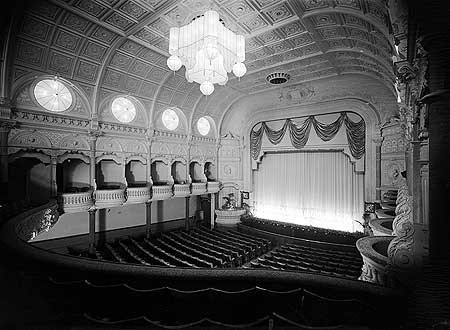 The building opened on 29th October 1888 as the Alhambra Opera House and Music Hall. Re-named the Palladium Theatre, it re-opened on April 6 1912 as a cinema. The building having been designed by Frank Matcham. On 15th April 1935 it was taken over by the Oscar Deutsch chain of Odeon Theatres Ltd, and it was given a new Art Deco style façade, designed by architect Andrew Mather, and was re-named Odeon on 8th June 1945. On 28th November 1937 the cinema reverted to its former name of the Palladium Theatre on the opening of the towns' new Odeon around the corner on West Street. The Palladium Theatre was closed on 26th October 1940 due to wartime conditions.

In 1942 it was taken over by an independent operator.

The Palladium Theatre closed on 26th May 1956 and was demolished in 1963. The Brighton Centre (conference and concert venue plus Odeon cinemas) now occupies the site.

Here is a link to a page showing vintage photographs and a potted history:
http://www.terramedia.co.uk/brighton/Palladium.htm