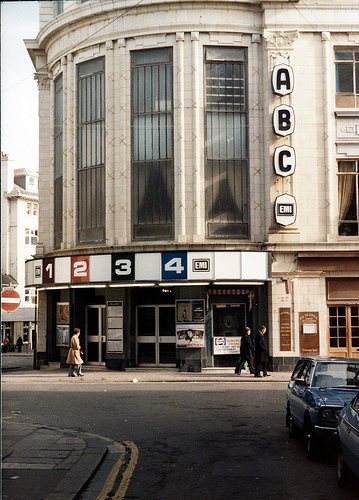 The Savoy Cinema opened 1st August 1930 by Associated British Cinemas, and was designed in an Art Deco style by Wiliam R. Glen. It’s interior had a Japanese theme and had 2,300 seats, increased to 2,630 seats in 1948. Unusually, the cinema had an underground car park with 300 places. Additionally, it had two restaurants, two cafes and, at one time, a dance hall. The cinema was re-named the ABC Cinema in 1963 and suffered various changes of name until it reverted to being the ABC Cinema in 1997. The cinema can be seen in some scenes of the film “Quadrophenia”.

Screen 1 was closed in May 1991 and was converted into a casino. Screens 2,3 & 4 closed on 20th January 2000 and were converted into a restaurant, bar and nightclub. Only the Grosvenor Casino section was open in summer 2007. It uses the building’s secondary entrance on the sea front located at 9 Grand Junction Road. By 2011, the main entrance on East Street and foyer was in use as a Chinese restaurant.

More photo’s of the Brighton ABC (under Cannon) here:

i really need some info about the night club in Unit 5 (floor 1 and 2, east street) — Toppers? —
cllr roy pennington

Here is a link to a photograph of the Savoy Cinema in 1930 and a potted history of the building:-
http://www.terramedia.co.uk/brighton/Savoy.htm

A shot as the Cannon Cinema here:–

Like the Forum in Liverpool, the initial designs for the Savoy and the Forum cinemas were by F C Mitchell who was Savoy Cinemas architect.
The exteriors of both cinemas are substantially as designed by Mitchell.
The Promenade facade of the Savoy is a twin of the curved corner of the Forum, as drawn by Mitchell on the first plans of the Forum.

I only remember this cinema when it was 3 screens, however, it was a good place to watch a film and always seemed to be busy. I understand that the owners found it hard to make it pay its way, but it was a loss to Brighton when it closed. We need another cinema and an operator should be found to re-open the East Street section of the building again as a cinema.

I worked from this cinema as a relief projectionist for the southern area of EMI, which meant I covered the ABC Hayward Heath, ABC Hove, ABC Brighton and Astoria Brighton as part of my job. The ABC Brighton was built with two projection boxes one on the roof but the rack was to great to be used and was never finished. The second was built into and under the circle.It was also planned to be a theatre but the stage was never finished as the Astoria was used as a theatre instead. It is also the only cinema I know of that had a car park under it.

I don’t know when the screen was split, however the larger screen 1 was closed in 1990 when the marina cinema opened. Therefore for the last 10 years of operation it was only a 3 screen cinema.

Screen 1 just sat empty for a decade. It was only after the whole site was closed that a conversion to a casino took place.