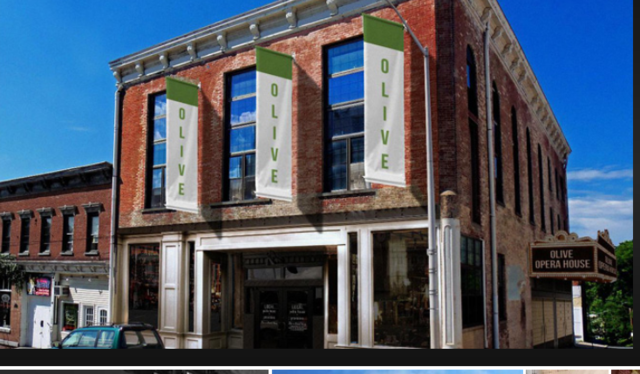 Opened in 1874 on the site of the former Opera House which had been destroyed earlier in the year, the Olive Opera House hosted concerts, plays, musical shows, community events, vaudeville and finally “celluloid entertainment” with live musical accompaniment. By 1914 it was operating as a movie theatre and was one of seven motion picture venues to operate in Ossining.

In the 1930’s when it ceased to be a movie theater, the original wooden beams of the structure were replaced by steel girders and the building was used for various commercial enterprises.

In 2014 it was proposed that the opera house be the king pin of the campaign to revitalize the downtown and the Grow Ossining Investment Fund was established. The revitalization of other upstate towns, such as Pleasantville, with the establishment of an arts center was cited as a model.

Monies were solicited and arrangement made to purchase the building. Although there was initially a lot of enthusiasm the completion of the project has been delayed, presumably due to the lack of funds. The fire damage to the basement in August 2018 did not help.

Although the address is Central Avenue the entrance is on Brandreth.

Uploaded pictures of the building and the rendering of the upgrade.