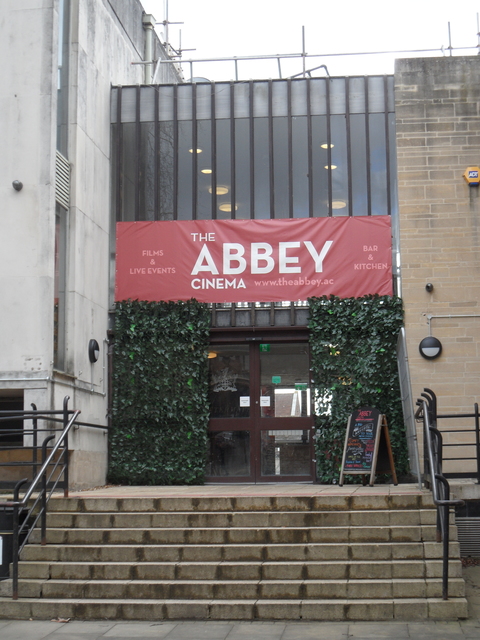 In Abingdon, Oxfordshire, the Abbey cinema is, unusually, spread over two separate venues.

Screen 1 is housed in the Abbey Hall, adjacent to the Grade II listed Guildhall complex that dates back to Medieval times and has seen much redevelopment and changes of use over the ensuing centuries. In 1966 an extension, Abbey Hall, was built towards the east, beyond the Abbey gateway. This was closed in August 2015 and, in January 2017, hopes of it being brought back to life were dashed when the owners, Abingdon Town Council, decided the current plans were not viable. (A previous £3.5m plan for redevelopment, including a 200-seat cinema as the ‘anchor’, put forward in 2013, had also been rejected.)

However, local residents responded by launching a petition, eventually signed by more than 2,000 people, calling for the Abby Hall to be made available for public use once again.

Subsequently, in early-2018, the council began discussions with Ian and Sue Wiper, who had successfully refurbished and re-opened the Regal Cinema at Evesham (and had been showing films at the town’s Unicorn Theatre since 2017). A rental agreement was entered into which runs until summer 2020 and work went ahead to install a state-of-the-art ten-metre projection screen, along with acoustic wall coverings and Dolby 7.1 surround sound. As at the Regal Cinema, the stalls are laid out cabaret-style, with 21 four-seat tables in three rows, while the circle has 90 seats set out in conventional style.

The Wipers’ had hoped to have the cinema open in July 2018, in time for the hit sequel “Mamma Mia! Here We Go Again”, but the work took longer than expected, and it finally opened on Friday 21st December 2018 with “Mary Poppins Returns”.

With the two venues now screening films, the Abbey Hall was designated as Screen 1, while the 89-seat Unicorn Theatre has become Screen 2.

Screenings at the Unicorn Theatre, however, continue to be interspersed with live performances, as the theatre continues in its original role. This Elizabethan-style theatre, the brainchild of Alan Kitching, had opened in 1953 in a space in the Abbey Buildings known as ‘The Checker Hall’.