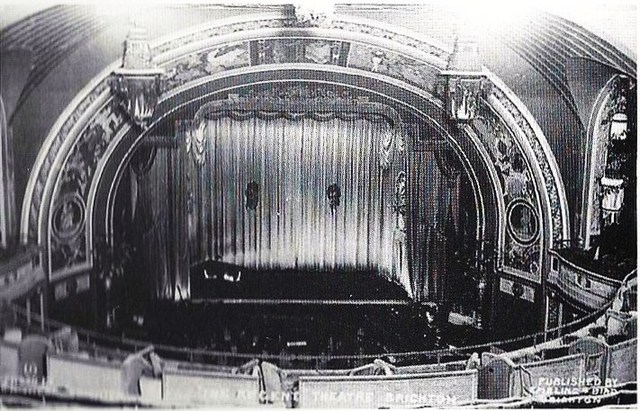 The Regent Cinema opened 27th July 1921 by Provincial Cinematograph Theatres Ltd.(PCT) on the site of the historic Unicorn Inn (built 1597, demolished 1920) and other buildings. It was equipped with a Norman Hill & Beard 3Manual organ with 38 stops. Facilities included a Georgian Restaurant with orchestra, Ship Cafe and upstairs on the roof a ‘Winter Garden’, which was converted into a 1,000 capacity dance hall in 1923.

The Regent Cinema was the first of PCT’s super cinemas, costing more than 40,000 pounds. It was designed by Robert Atkinson with interiors by Walpole Champneys, including murals by Walter Bayes, principal of the Royal College of Art. The proscenium was designed by Lawrence Preston of Brighton College of Art.

In January 1929 a fire did much damage to the stage end and auditorium and the building was closed while repairs and renovations took place. It reopened after a remodel and the installation of a Western Electric(WE) sound system on July 1, 1929 with Al Jolson in “The Singing Fool”. A new Wurlitzer 2Manual/9Ranks organ was installed and opened by organist Terence Casey. On Sundays silent films continued to be screened for a while, with live performances on the stage. Gaumont British Theatres chain were soon operating the cinema. In later years, it became part of the Rank Organisation.

In July 1967 the ballroom became a bingo hall. The Regent Cinema closed on 14th April 1973 with Liza Minneli in “Cabaret” and it was demolished in 1974, the site being occupied by a Boots chemist store.

There were two entrances; the entrance on Queen’s Road serviced the main foyer and circle seating area. The North Street entrance serviced the stalls seating area and the lower areas, as this entrance was at a much lower point due to the lay of the land.

Vintage photographs of the Regent Cinema, and more on the Wurlitzer organ and its console:
http://www.ukwurlitzer.co.cc/2046.html

There was a secondary entrance to this huge theatre in North Street, across the side road from the entrance to the Imperial / Essoldo Theatre. Photo here from 1974:–

Terence Casey. The name is quite familiar. My father, under the pseudonym Arthur Raymond, followed him as resident organist in about 1929 at the time of the fire, until the mid-thirties when he was called elsewhere. As next of kin, my mother and I were given “complimentaries” for Thursday evenings, when business was slacker. We were greeted by the managers, either Mr Williams or Mr. Ainsworth who regularly appeared in evening dress on the front steps of the forum. Our free tickets were valid at all GB cinemas. It was a splendid theatre, and obviously enterprising by its mounting of a German warplane over the front portico. I remember seeing that aircraft every time I went by in the bus to school, but never saw that memorable film there. (I saw it at the North Street Grand). Once there was a German film called “Schuldig” meaning “Guilty” and I probably saw “Morgenrot” “Red morning” there, about a submarine. My outstanding recollection is about “Naughty Marietta”, bringing Nelson Eddy and J. MacDonald together for the first time. It won an Oscar for some sub-section, probably sound recording. It has to be remembered that earlier on, sound pictures were on disc, not film, so that the projectors required record (331/3 r.p.m) players at the back of the equipment, and considerable assiduity in maintaining synchronization.

Oh, and the unforgettable Jean Harlow in “Blonde Bombshell” and “Dinner at eight”

Thank you for info about George Formby. It seems that there was one scene where he had to circle on a motorbike a large vertical cylinder and emerge at the top like someone being shot from a cannon.

I wonder where the projection box was located at the Regent. In 1955 major structural work was required to shorten the balcony to enable CinemaScope to be projected and in 1962 more work was required for the installation of 70mm to enable roadshows to play there and end the Astoria’s monopoly of 70mm presentations in Brighton.