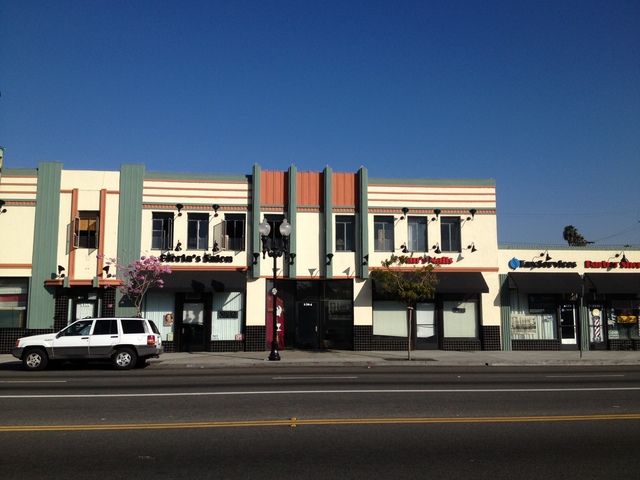 Opened as the Oriental Theatre in May 1924. Around 1933 it was renamed LaShell Theatre. A small neighborhood theatre that had no real distinctive features other than a small Art Deco style marquee. By 1950 it was operated by Cabart Theaters Corp. By 1958 it was converted into a church. On May 11, 1959 it was converted into the LaShell Playhouse which operated for only a short time as a live theatre with 275-seats.

I thought about that Joe, but the two buildings appear dissimilar. Did you see the large add-on in the back of the Oriental? I don’t think that was ever part of the LaShell.

The stage house of the La Shell was apparently removed in the 1933 rebuilding, after the earthquake. The Southwest Builder & Contractor article said that the back of the building and stage house were to be rebuilt, but the La Shells must have decided to leave the stage house off. I still think it’s most likely that the library got the address wrong. Their photo collection is full of such errors.

The buildings actually look remarkably similar to me. The four wide second floor windows of the old building could have easily been narrowed into the eight windows of the La Shell, and the La Shell’s tower was undoubtedly part of the 3828 sq. ft. 1939 addition. That’s probably when the building got its Art Deco look.

If you’re correct the new listing would have to be deleted and Oriental given as an AKA for this theater.

The photo would confirm that the La Shell was built as a theater, though.

I really don’t see how the Oriental could have been at the address the library gives. If they’d said 4321, where there is now a building built in 1948, it would be plausible, but the spot they say it was in there’s only that 1924 building that couldn’t possibly have been a theater. If there had been a theater there, and it had been demolished and the stores in front preserved and reduced to one story, then the Assessor’s office would have given an effectively-built date for it.

Does anyone remember the double features, news reels, cartoons, and serials and the cheap prices? Seems like there was a 12,5 cent price for a while? Good memories – remember the Abbott and Costello movies and the war movies.

more info can be found in the LB Public Library Digital Archives. in ‘Theaters'for pic’s. and the History Annex, and Community Information 'theaters’ lists 54 theaters in Long Beach.

The photo information with the Long Beach Digital Archives' copy of the picture of the Oriental Theatre discussed in earlier comments gives the correct address of 5384 Long Beach Boulevard. That means that Oriental Theatre and Murray’s Theatre (the name on the side of the stage house) are aka’s for the La Shell. It was the L.A.Public Library that got the Oriental’s address wrong, as I’d suspected (although their digital copy is bigger and a bit clearer than the copy Long Beach shows.) Our listing for the Oriental Theatre is redundant and should be deleted.

Thanks for letting us know about the archive, DebraLea.

Laura La Shell was the widow of George La Shell, who died in 1928.

Two horrific incidents may have ended the LaShell Theater’s film run. It then became a house of worship called the LaShell Assembly of God through 1958. On May 11, 1959, it was converted to a 275-seat live venue, the short-lived LaShell Playhouse.