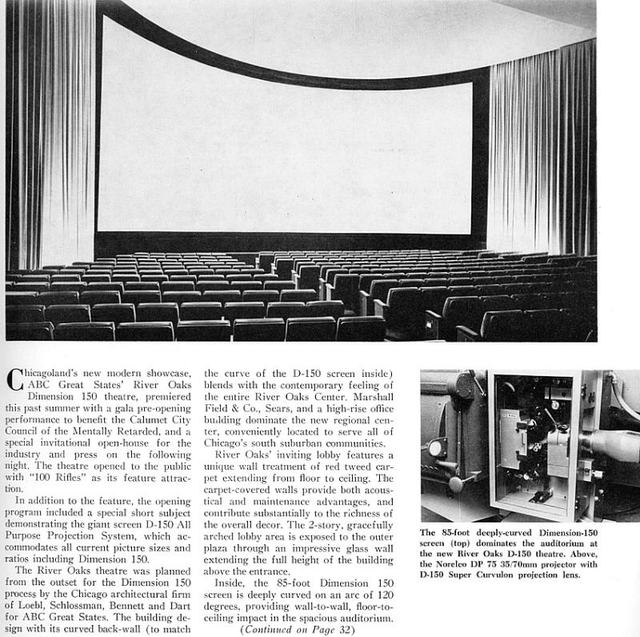 The original one screen River Oaks Dimension 150 Theatre was opened May 30, 1969 with Jim Brown in “100 Rifles”. It was operated by ABC Great States Theatres. It had 1,600 rocking chair seats, a large curved screen, auditorium lights on the sides of theatre that were dimly lit during intermission, and a giant curtain that opened from both sides at the middle. This theatre was classy to say the least.

During the 1970’s 70mm & stereo sound was installed which only added to the great experience. Every major event film opened there and if you had a choice to see the same film there or at one of the bland, non stereo sound General Cinemas in Northwest Indiana, you usually took the drive to Calumet City.

“Airport 1975”, “Logan’s Run”, “King Kong”, “Star Wars”, “Close Encounters of the Third Kind” and “Superman” were all films my family chose to see there. Every experience was a great one. I can remember seeing “Aliens” there and the sound was so loud my ears rang after the movie. That was the first and only time that has ever happened.

The area is not as safe as it once was but I still took in a movie on rare occasions (both of the new “Star Wars” films, “Titanic”, and “Spiderman”) but the management seemed to care little about its appearance. The curtains remain open all the time. The side lights are never used and now the flood lights the cleaning crew uses are turned on before and after the movie. Unfortunately when the flood lights are turned on you cannot see the credits on the screen. The rocking chairs were removed in 1994.

This theatre closed in January 2006 and was demolished in June 2018.

Just a quick note: This theatre was a 70mm equipped theatre from the start designed around U.A.’s proprietary D-150 process. I visited the booth prior to opening to see a friend of mine who was the RCA engineer assigned to the theatre and the Norelco DP-75’s were just being installed.

As of this past week, there seems to be asbestos abatement going on inside.

Demolition is underway. Another piece of childhood gone.

It has been taking a while to bring it down as it’s only a small crew working but as of Friday evening 6/22/18 it’s all gone except for the extreme east and west of the lobby. The famous curved back wall that matched the screen within is gone as is the screen and the whole theatre except as noted. I helped myself to a brick from that area.

Doubly sad because it’s not coming down to make way for something else. Simon malls sold RO to a new owner and Cal City managed to push them into demolishing it citing its deterioration. Yup, I’m sure the roof was leaking but I doubt it was in any danger of collapsing.

Not that I ever expected it to reopen but just imagine if a larger player like AMC or Marcus had come in and built an attached multiplex and refurbished this property. IF they can figure out how to show digital on the deeply curved screen.

If anyone knows what happened to the Super Curvulon lenses please write me at lssr AT filmteknik.com I once worked out a deal to buy them from Simon but they were gone and I was unable to find out who LCE sent in to remove everything except basic projection & sound. It was after they closed but just before LCE went into AMC.

The time capsule was waterlogged when they opened it in 2006. From the former Hammond Times-“River Oaks Theater 9-10 Managing Director Jim Leparski retrieved the time capsule on the theater’s last day of operation in 2006, 13 years before it was supposed to be pulled out, but it also proved to be a bust. The capsule contained mostly paper items, such as letters written by Thornton Fractional South honor students, that were turned into a soggy mess because the capsule was waterlogged, according to The Times of Northwest Indiana archives.” I believe there are comments here with more info if you go through all the comments.