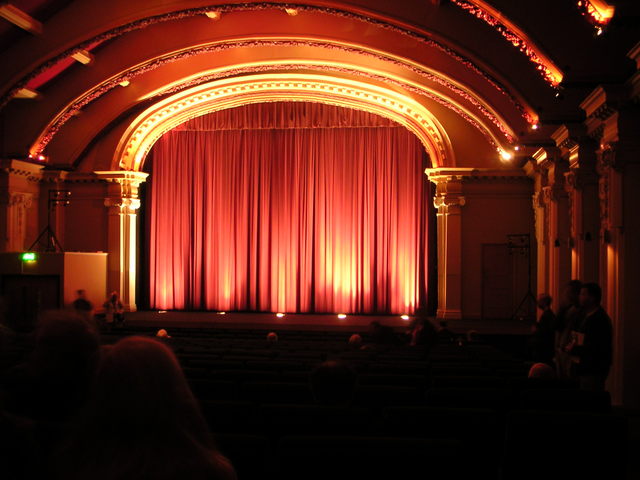 Located in the southwest inner-city London district of Brixton. Opening on 24th March 1911 as the Electric Pavilion, it was designed by architects E.C Homer & Lucas for cinema pioneer Israel Davis of the Davis Pavilion Circuit. It had an organ installed beside the screen to accompany silent films. It has outlasted its local competition (the fabulous Academy, former Astoria Theatre with its superb Atmospheric style interior). The seating capacity was 800 in 1937 when it was known as the Brixton Pavilion Cinema. In 1954, noted cinema architect George Coles made some alterations to the building (possibly for CinemaScope installation).

The cinema has been through a lot of tough times but after restoration of the exterior in 1994 and a further four screens with bar and café being built alongside (on the site of the World War II bombed Brixton Theatre designed by theatre architect Frank Matcham). Its fortunes have seen a total reverse from the 1970’s when it was nearly demolished.

The Ritzy is now part of the Picturehouse group who run many of London’s best independent art house cinemas, and was voted by Time Out readers as London’s second favourite cinema in 2001, the Ritzy programme covers the best of quality mainstream to art house and documentary programmes, it also has one of the first three DLP digital projectors in the UK (the others being at Manchester Filmworks and the Odeon Leicester Square).

The main auditorium retains magnificent Edwardian plasterwork with swagged ceiling ribs and panelled walls, as well as the original proscenium arch, and now seats 346 due to extra spacing between rows and larger seats. In 2011, the screen (without a curtain in front of it) in the main auditorium is placed in front of the original proscenium arch and was designed and installed by architectural firm Eatle Architects. They also redesigned the café/bar area in the former original foyer. The four new screens have seating for 174, 113, 108 and 52.

The Ritzy Picturehouse is a Grade II Listed building.

I remember the Ritzy well, as I used to go there on a Saturday night after finishing my shift at Streatham Odeon ( FKA The Astoria ).
Great programming and friendly staff.

Herewith a link to an early picture from 1911, and an interior of the restored auditorium : hats off

The Ritzy Cinema is now known as the Ritzy Picturehouse.

Some before and after photographs of the Ritzy Picturehouse and more historic details:
http://www.urban75.org/brixton/history/ritzy.html

Close-up before and after photographs:
http://www.urban75.org/brixton/history/ritzy2.html

The site of the Ritzy prior to its errection and the Brixton Theatre & Opera House which stood next door:
View link

Architect Frank Matcham designed the Brixton Theatre & Opera House. It was never a cinema, but worth mentioning here. It was destroyed by bombing in World War II and the site is now used by the Ritzy as their newly built bar/cafe and 4 extra screens, as shown in the bottom photo.
View link

Two more before and after photographs:
View link

Another interior picture here from 1985

Video about the Ritzy:
http://www.youtube.com/watch?v=TBums7k9pVc

Exterior and lobby photographs from February 2015.

The main photograph was taken before the new screen in screen 1 was added. They can now show 3D films.

The Ritzy recently appeared in a comic strip in Doctor Who Magazine. The strip was set in the seventies when it was known as the Classic Cinema.