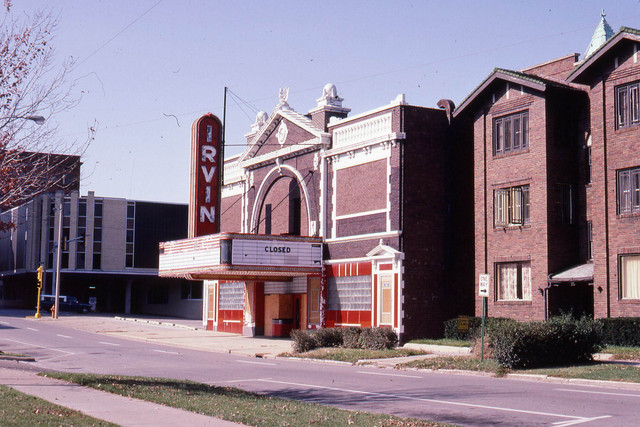 One of two downtown Bloomington movie houses (the recently renovated and reopened Castle Theatre being the other), the Irvin Theatre was a center of entertainment from the time it opened August 26, 1915 until it closed January 7, 1982.

It was demolished on October 3, 1987, and for many years, its auditorium seats had been stored in the Castle Theatre during its many years of being shuttered.

The Irvin Theatre, according to entries on this web page, was under construction in April, 1915. That same year, the November issue of The International Confectioner listed the Irvin Theatre Candy Shop at Bloomington in its new businesses section. The theater most likely opened about the same time.

The July 22, 1916, issue of The Moving Picture World said that the owner of the Irvin Theatre, Clarence E. Irvin, had closed his older Princess Theatre, which had been located at 412 N. Main Street.

Clarence Irvin operated several other theaters in Bloomington at various times, including the Castle and the Illini. He eventually entered into various arrangements with both the Midwest Theatres circuit and Publix Great States Theatres.

The Irvin opened on August 26, 1915. It had 1,100 seats. It became the first theater in Bloomington-Normal to install air conditioning and the only one to feature a CinemaScope screen.

In 1974, the Kerasotes chain purchased the theater from Plitt, which had owned it for more than 20 years. As business declined, the theater became a $1 house in 1981.

The Irvin’s last day in operation was January 7, 1982 (playing the Burt Reynolds comedy “Paternity”). After closing, it stood vacant until 1987, when it was purchased by a neighboring church. It was torn down in October of that year to make way for a parking lot.