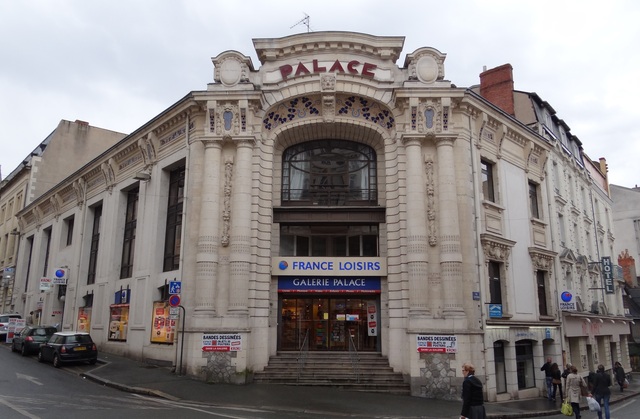 The Cinema Familia was opened by Pathe on 21st February 1922. It has a highly decorated Art Nouveau style exterior. Seating in the auditorium was provided in orchestra and balcony levels. It was later renamed Cinema Palace and was closed in the late-1970’s. In 1983 it was converted into a shopping gallery.

Some of the information above is incorrect. According to the Pays de la Loire departmental heritage site, the theater was constructed by the chocolate company Poulain. A Mr. L. Le Bomin is noted as the contractor in the names carved on the facade.

Later, when it became part of the Pathé chain, it was renamed Palace.

Also of note, the sculptural work was executed by Maurice Legendre, who was a fairly well-known artist in his day, and had done decorative work on several other buildings in town.

For photos of an extensive survey done in 1980, see this page: https://www.patrimoine.paysdelaloire.fr/linventaire/detail-notices/IA49000818/

Sadly, the entire interior, including a spectacularly ornate lobby that remained original until the theater closed, was destroyed in a hamfisted conversion by ‘architects’ who saw fit to carve their names into the facade as well.