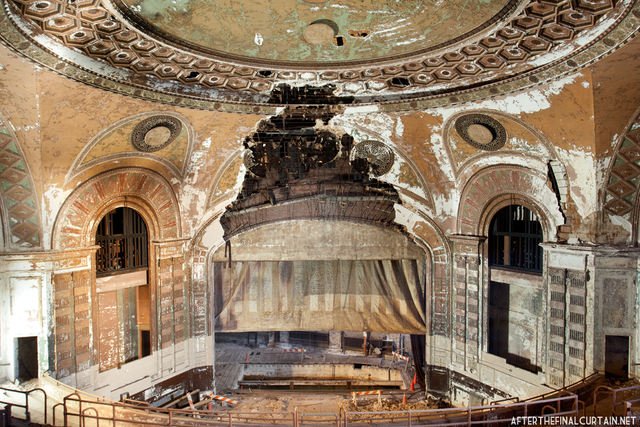 The Loew’s Coney Island Theatre seated 2,472 when it opened on June 17, 1925 with Blanche Sweet and Ronald Colman in “The Sporting Venus”. It was designed by architectural firm Reilly & Hall, with Samuel Lewis Malkind as associate architect. The Loew’s Coney Island Theatre had a large fully equipped stage and a large theatre organ. There was a ballroom located on the second floor and offices on the upper floors. Renovations were carried out in summer of 1947. It was taken over by the Brandt Theatres circuit in May 1964 and was renamed Shore Theatre. In January 1966, film use had ceased and live theatre was presented, eventually going over to burlesque, but this was a short lived venture, and films returned. In 1967 there were 1,314-seats in the orchestra, 336-seats in the mezzanine and 650-seats in the balcony.

By 1971, the Shore Theatre had begun running X-Rated adult movies and was possibly closed around March 1973. It has remained unused and empty ever since. In December 2010 it was designated a city landmark building.

On the evening of October 29, 2012, the historic ‘Shore’ blade sign on the front right hand side of the theatre was badly damaged by Hurricane/Superstorm Sandy and it has been removed.

The Shore Theatre was sold in January, 2016, with the new owner planning to restore it and possibly bring back live entertainment, and convert the office block into a hotel.

That is great news! I hope they will be able to restore plenty of the former glory this theatre once used to have.

They’re shoring it up!

“The people of Coney Island can start looking forward to an amazing theater,” said lawyer Igor Oberman. “They don’t want this to be just a seasonal venue — it will be for all seasons benefiting not only tourists, but the people here year-round.”

The rebirth bodes well for the People’s Playground, which area businesses and political leaders have been pushing to become a destination in the winter as well as summer, according to one neighborhood booster.

“This is wonderful news,” said Boardwalk impresario and Coney Island U.S.A. founder Dick Zigun, who has long advocated for the ailing theater. “If Coney Island is on a trajectory to go year-round and build hotels, you have to have nighttime entertainment and that’s the place to do it, at a landmarked Broadway-equivalent theater.”

The building has been vacant for decades and fell into serious disrepair, and Pye is still determining what it will take to make the theater show-worthy again, Oberman said.

“They’re still in the assessment phase,” he said. “The property has been derelict for many years, so right now they’re doing structural studies, and trying to understand the physical condition of the building.”

The theater was built in 1925 as the Loew’s Coney Island, according to historian Charles Denson. It housed Vaudeville acts in its heyday, he said. The Brandt Company took it over in 1964, and the theater started showing X-rated movies in 1972 in a last-ditch attempt to lure audiences.

Kansas Fried Chicken mogul Horace Bullard purchased the property in 1978 hoping to convert it into a hotel and casino, but the state decided against allowing gambling in the People’s Playground. The land baron put the building up for sale and let it sit derelict for the next several decades, drawing criticism from Coney Island advocates as the structure deteriorated and became an encampment of homeless people. Bullard died in 2013, and a 2015 announcement that the city would scoop up other derelict Coney Island properties that passed to his family reignited calls to seize the property through eminent domain.

It’s not the first historic Loew’s theater to be pulled off the historical scrap heap — the Kings Theatre in Flatbush reopened last year after the city hired a theater group to restore the iconic venue.

If and when it does open people won’t be complaining about getting there since there are 4 subway lines that terminate there. The major logistical problems would be getting the tractor trailers since they have to use the streets. Also since the stage door is located on Stillwell Avenue and last i knew there were parking meters up and down the block where the former taxi stand used to be. Logistics at work.

EcRocker, Im sure something would be addressed about the stage door issue. Many years ago (mid 80’s) when we had live shows at the Ritz Theatre in Elizabeth NJ, our stage door was on Jefferson St with parking, etc. The city would just close off that one block to traffic on load in days. Not the best scenario, but it worked.

Mark I know the building on the outside very well. Since most of the cars parking there are from Memorial Day through Labor Day. From what I recall the few times those doors were open the stage was at street level so load ins and outs would have to be ramped or forked of the trailer.. There is no other way around it.

As reported by the Coney Island Blog the Shore is now slated to become a hotel and catering hall with retail, there will also be a restaurant and rooftop swimming pool. http://www.theconeyislandblog.com/?p=3383

I saw workmen bringing in some materials through a door which is the left side of the exterior entrance. There was one outer lobby postercase in poor condition and the cement work under the area over the boxoffice (demolished) that was quite intact but in cement form and unpainted. Work is about to start here soon.