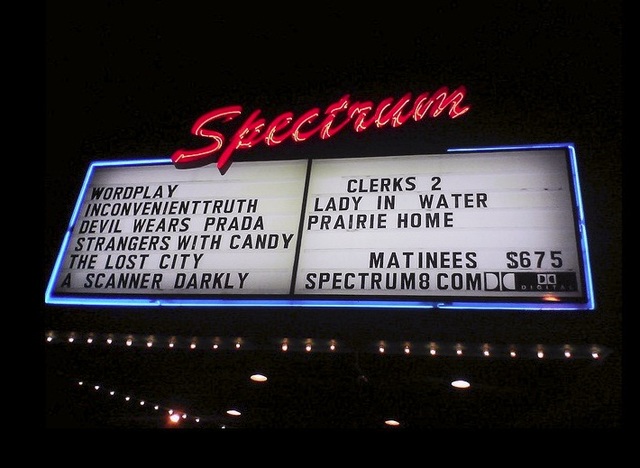 Opened in the early-1940’s as the Delaware Theatre, It was designed by the architectural firm Blatner & van der Bogert. It was operated by Stanley-Warner and had a seating capacity for 699, all on a single floor.

From the Spectrum 8’s official website: Located at 290 Delaware Ave. in Albany, NY, the Spectrum 8 Theatres is a locally owned, independent movie theatre that has been in operation since 1983. We are committed to showing films that are provocative, entertaining and thought-provoking. By showcasing the best first-run independent, foreign and Hollywood films, the Spectrum has differentiated itself from the competition. We offer a state-of-the-art alternative to the mall movie experience. Dolby digital and stereo surround sound enhances enjoyment of our “spectrum” of film offerings. Off-street parking in either of our two lots means no hassles and no mall traffic.

The Spectrum’s Art Deco style atmosphere, art gallery, and slide shows that feature the work of local artists make going to the movies a unique experience. Our snack bar offers a delicious selection of baked goods, coffees, teas and popcorn with real butter. Special events featuring conversations with independent filmmakers are a regular part of our programming. We are committed to keeping alive the idea of cinema as a vital art form and are proud to have created what is now considered to be the Capital District’s primary resource for films that were formerly available to Metropolitan residents only.

It was taken over by Landmark Theatres.

This theatre gives the mature audience a chance to see quality films
in the New York State Capitol region.

Here are some ad mats from when it was the Cinema Delaware:
http://plantweed.blogspot.com/search?q=delaware

This is part of an August 2007 article in the Albany Times-Union:

Aug. 10—Outside the Spectrum 8 movie theater in Albany, the midday sky is a blazing iridescent blue. But lower your gaze just a bit to the northern wall of the theater, and the sky abruptly transforms into an angry red, crowded with dozens of spectral crows. Below are several human silhouettes in various poses, some staring up at a giant, crouching man whose eyes appear to bulge out to his upper lip.

Despite the fact that the scene on the wall evokes a cold, storm-soaked feeling, the Albany artists who go by the names Mr. Prvrt, Dwell and One Unit are still sweating, shielding their faces from the hot sun as they map out their next move.

For the past few weeks, the three street artists have spent nearly every day outside the Spectrum, painting this colossal mural that will cover the entire 30-foot-high-100-foot-long wall, which leads from the rear parking lot to the front of the building on Delaware Avenue.

“It’s more street art,” said Dwell. “It’s shoved down your throat like graffiti should be.”

great place, go all the time…remember seeing “Bound” and during the racy lesbian scenes a couple of hillbillies from East Berne or something snorted and guffawed…most patrons found them quite entertaining…

Just saw Peace, Love and Misunderstanding at the Spectrum. As part of the slide show they present before the show they show a slide stating that the theater is now self powering with 216 solar panels installed on the roof.

I believe it actually seats 990.

I enjoyed the delaware theatre as a young boy in the 1970’s with friends and family.

You’re right, 699 was the original capacity for the Delaware Theatre.

The original owners sold to Landmark Theaters and the theather is now the Landmark though they sort of keep the original Spectrum 8 name. No other changes, still top notch.