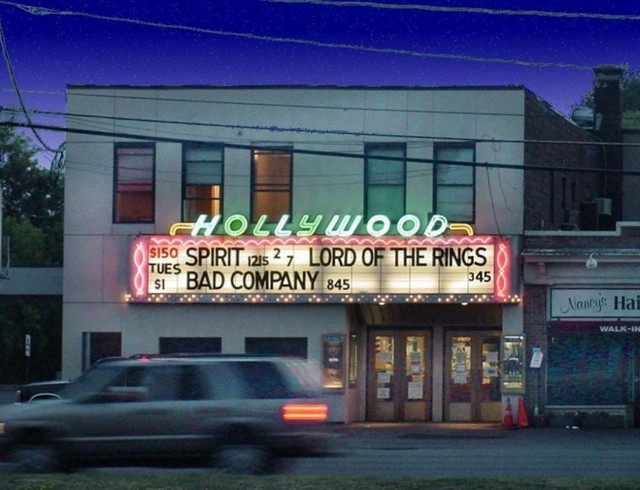 How they manage to do it is a mystery, but the Hollywood Theatre charges prices that other sub-runs charged two decades ago: As of 2012 prices are $1.75 with a surcharge of $1.75 for 3D movies. Tuesdays, though, are bargain day and admission is only $1.25 or $3.00 for 3D movies!

Pictures taken this past November –

It is amazing, I took my grandkids there a few months ago and and it was still $1.50. I remember a number of years ago they use to rent videos in the lobby, but gave it up. While the inside is pretty plain, with the walls all painted black, the seats are comfortable and the projection and sound are fine. Strange as it may seem, it was the first theatre in the area to install Dolby Stereo and as a result ran “Star Trek-The Movie” first-run because Paramount insisted on Dolby and the first-run theatres, at the time, didn’t have it.

Here is an article from the Syracuse Herald Journal dated 10/31/97:

Name of business: Hollywood Theater
Location: 2221 Brewerton Road, Mattydale
Owner: Conrad Zurich
Type of business: A 400-seat one-screen discount theater,
which shows second-run movies at a price of $1.50 per seat
($1 on Tuesdays).
Number of employees: 12
How long in business: Since 1966
Market area: All of Onondaga County
Owner’s former occupation: He has been in the theater business
all his life. His company, Zurich Cinema Corp. in Fayetteville,
runs 50 screens in New York and Pennsylvania. He also owns a
second-run theater at the Tri-County Mall in Baldwinsville.
Why did you start a business: “I just enjoy the theater business,"Zurich said. "My father was a film salesman."
Best part of owning a business: Running a place where people come for a good time.
Worst part: Nothing major, just the "normal aggravation of business, no one specific bad part”.
Philosophy for running a successful business: “Keep the customer happy,” Zurich said.
Advice for others starting a business: Be prepared to work long hours, Zurich said.
What’s new? The theater, concession stand and bathrooms have been refurbished recently.
How do you pick the movies? “We try to keep a mix of family and teen and adult pictures,” Zurich said. “And we try to pick the best of the first-run pictures to play, and the ones that we feel will have the widest audience with a heavy emphasis on family.” Some of Zurich’s theaters are first run, so he sees all the movies in advance.
How has owning a theater changed in 30 years: “It’s completely changed,” Zurich said. “I think the quality of the picture that we’re giving to the public is better, both in content and in special effects.” He also said the movie theaters themselves have gotten better.
What about competition from new theaters? “We really have a different market than the firstrun theaters charging $7 or $7.50.”

They also used to dabble in the “Midnight Movie” business and were showing Rocky Horror Picture Show Saturdays at Midnight for years and years and years. This is during the 1980’s.

An article about the Hollywood: View link

I remember when they used to show first-run movies. I stayed the entire day for one movie on the day it premiered. Six showings for $3.50 in 1982. Felt a little guilty, but they still got quite a bit of money from me for several cups of soda and several tubs of popcorn, which were lunch and dinner that day.

As of April 2022, the Hollywood has changed its prices. Deep discounts no longer exist. It’s $6 for adult matinees, seniors and children and $9 for regular adult admission.

As of January 2021, the Hollywood is now showing first run films. The $6/$9 admissions are still significantly discounted for a first run film especially when compared to the other first run theatres in Syracuse.