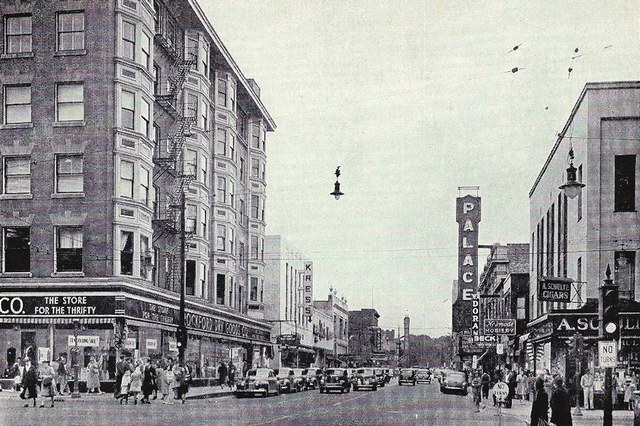 One of Rockford’s earlier movie houses, located on Main Street, the Palace opened in 1915, and was located a few doors down from the Orpheum. The Palace closed in 1955 and was later converted into a store. The building was demolished around the early 1980s.

This was one of Rapp and Rapp’s earliest.

According to The Rockford Morning Star newspaper the Palace Theatre opened on February 22, 1915. Part of an article from February 21, 1915 reads:
“…Messrs. George and C. L. Rapp have specialized in theater designing and among their latest masterpieces are the New Oprheum in Champaign, the Orpheum in Quincy, the Columbia in Davenport, Ia., the New Palace in Fort Wayne, Ind., the Hippodrome in Chicago, the Ringling Theatre in Baraboo, Wis., and the Palace in Rockford. They also have theaters under construction in Louisville, Ky. and Grand Rapids, Mich.”

According to a 16mm movie my uncle, Tony Maar, took in 1948, the following vaudeville entertainers were on the bill for shows spanning February 6-9, 1948:

*it’s difficult to tell from a silent film but between Laurenz, Dornfield and Penman, at least one one did magic, one juggled and another did standup comedy.