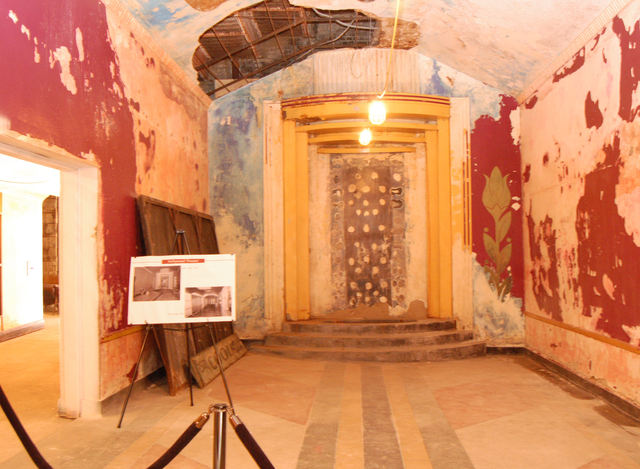 The Hollywood Theater opened October 26, 1935 in the Audubon Park neighborhood of Northeast Minneapolis. The theater was designed by the architectural firm of Liebenberg & Kaplan in the “Zigzag” Art Deco style. The facade of the theater is appointed in Kasota limestone with a base of dark rainbow granite. The off-center main entrance is topped by a chimney tower which originally held a vertical sign. The original marquee and vertical sign were removed in a 1949 renovation at which time the current marquee and green tiling were added. Above the right exit doors are porthole lights which, along with vertical and horizontal striping, make the theater an excellent example of the Art Deco style. Three small windows above the exit doors help to balance the asymetrical facade while bringing light into the projection booth. The recessed side walls are appointed in dark brick with a repeating zigzag pattern. The sides and rear of the theater are soft brick.

The interior of the theater is appointed with many deco elements. The lobby floors are patterned terrazzo in black, green and gold. The lobby features glass light boxes and a terrazzo fountain backed by a carved mirror. A lower lobby is accessed by a curved staircase which leads to the restrooms and mechanical areas.

The auditorium of the theater features one of the first examples of stadium seating. The total seating capacity was around 925. The main floor slopes gently down to a small vaudeville stage at the base of the film screen. The proscenium is framed by Art Deco columns once offset by custom metallic draperies. The walls are lined with six large porthole light fixtures with streamlined chrome rails. The wall surfaces were originally covered in acoustic tile in several colors. Patterns in the tiles continued the streamlined look of the theater. The theater was fully operational from 1935 until 1987 when falling sales and competition with home VHS led the owners to foreclosure. In 1993 the City of Minneapolis purchased the still intact theater to preserve and redevelop the property.

Several proposals to develop the theater were made over the years some of which called for partial or complete removal of the building. In 1993, neighborhood residents formed a non-profit to raise funds and restore the theater to its 1935 appearance. Lack of funding and pressure from the city to move the process forward collapsed the deal and the group disbanded. In 1998 a call for proposals was made, the most promising of which was a plan for vaudeville acts, showcased in a fully-restored theater. Once again lack of funds and impatience led the developer to be dropped. In 2001 a third request for proposals was initiated, bringing in the current developer of the site.

The current proposal for the site is to retain the theater for use as a multi-use entertainment venue. The theater would be restored and updated and full-service kitchen added. Reworking of the seating will allow for a wide range of uses from live performance and dance to business meetings and receptions. The seating capacity will be reduced to 300. The theater will have a wine and beer license to serve beverages during performances and events.

The future owner of the theater building is applying to run the Hollywood Theater as a non-profit organization in conjunction with another Minneapolis venue, the Bryant-Lake Bowl. Renovation of the theater is being funded privately and in part through tax-increment financing. A former gas station site across the street from the theater is being redeveloped as housing to finance the project. Work is expected to begin in early summer 2004.

The theater has been designated as architecturally significant by the City of Minneapolis Heritage Preservation Commitee (HPC) as well as the Minnesota State Historic Preservation Office (SHPO). The theater is currently eligible for a place on the National Register of Historic Places.

any information regarding the renovation of this theater would be greatly appreciated.

The City of Minneapolis issued a Request for Proposals for redevelopment of the Hollywood Theater.
View link

Old seats from this theater are for sale; information here:
View link

I was at the Hollywood open house last Saturday. This was the first time I’d ever been inside the theatre. I was surprised at how big the auditorium was. It seemed larger that the 925 seats.
Anyway some of the city people said that to reopen the house would run about $1 million and to really restore it around $1.5 million. But seem awfully low ball to me. The Shubert downtown is costing upwards of $37 million.
But anyway I’ll go with their numbers.The city has removed the mold, put on a new roof and the house has been heated since the city bought it.
The big problem is parking. It’s mostly street parking. And I’m unfamiliar with the neighbourhood. I don’t know if there would be support for a cinema.
But the Riverview, Parkway and Heights have all sliced out a nice piece of business. None of them have much off street parking either.

There’s a lot of incorrect information here – both in the description and the comments. The Hollywood is for sale by the city of Minneapolis. The cost of the theater is 250K and the estimate cost of restoration is 5-7 million. The property, along with the theater, is associated with two parking areas which are located across the street.

Over the years, multiple attempts have been made to buy the theater but the City has yet to find someone with an acceptable plan which works within the guidelines set forth by the historical registry.

I grew up in this neighborhood and saw dozen of movies at the Hollywood as a kid. I also attended the open house several weeks ago that was part of the Art-a-Whirl festival. For this event, the City opened the theater to bring in guests and try to drum up interested buyers. They also used the lobby to feature art from local school children. The Hollywood will be used in late summer in its current condition to host a Theatre Pro Rata production of Waiting for Godot.

I have a couple of photos of the inside of the theater up on my Flickr.com feed. Photos were taken with an iPad, so the quality isn’t the greatest.

The links are here:

Details on buying the theater from the City can be found here:

Soon as I win the lottery, that sweetie is mine!

This theater has to be saved. Period. Move the building. Fundraise. Co-opt the work. Get ‘er done.

New article on redevelopment/renovation plans for the Hollywood and four other local former movie theaters:

This opened on October 26th, 1935. Grand opening ad in the photo section.