Cinema in the Arches

Cinema in the Arches (Official) 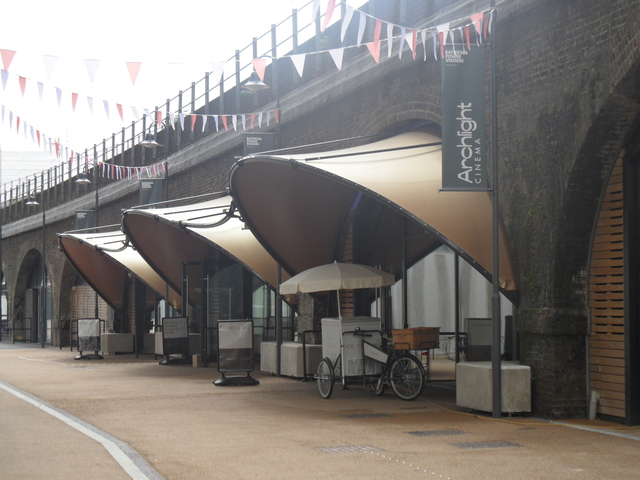 Situated on the south bank of the River Thames, in Nine Elms, Battersea, an inner-city district of South West London, Battersea Power Station was built by the London Power Company to the designs of Leonard Pearce, Engineer in Chief, and CS Allott & Son Engineers. The architects were J. Theo Halliday and Giles Gilbert Scott.

One of the world’s largest brick buildings, it comprises two power stations, built in two stages in a single building. Battersea A was built between 1929–35 and Battersea B, to its east, between 1937-41 (but not completed until 1955). Battersea B was built to a near identical design to Battersea A, which provided the iconic four-chimney structure.

Battersea A was decommissioned in 1975. In 1980 the whole structure was given Grade II listed status; Battersea B shut three years later. In 2007 the listing was upgraded to Grade II*.

The empty building fell into near ruin, with various schemes failing to materialise. Eventually, in 2012, it was acquired by Malaysia’s SP Setia and Sime Darby, who formulated a redevelopment to be undertaken in seven main phases, some of which will run concurrently, which will include residential units, bars, restaurants, office space, shops and entertainment spaces.

Phase 1 (Circus West Village) began in January 2013, to designs by architects SimpsonHaugh and dRMM. It comprises 753 new homes and a diverse range of restaurants, bars and shops - and, of course, a cinema!

The Archlight Cinema, developed by the team behind the independent Olympic Studios Cinema in Barnes, West London (which has its own page on Cinema Treasures), opened in late-March 2019. The three screens (seating 57, 37 and 37 in “comfy, reclining seats accompanied by individual tables, designed to be the perfect size for a bottle of wine or a cocktail, homemade popcorn and sweet treats”) are set into three railway arches, and have their own separate entrances, with no connecting corridor, so as to maintain the integrity of the original arches. Extensive soundproofing has eliminated the sound of the trains above!

In February 2022 it was re-named Cinema in the Arches.

Now called Cinema in the Arches, this is a very comfortable small cinema, with screen tabs!
Photos from February 2022:-

CINEMA IN THE ARCHES - Exterior at night