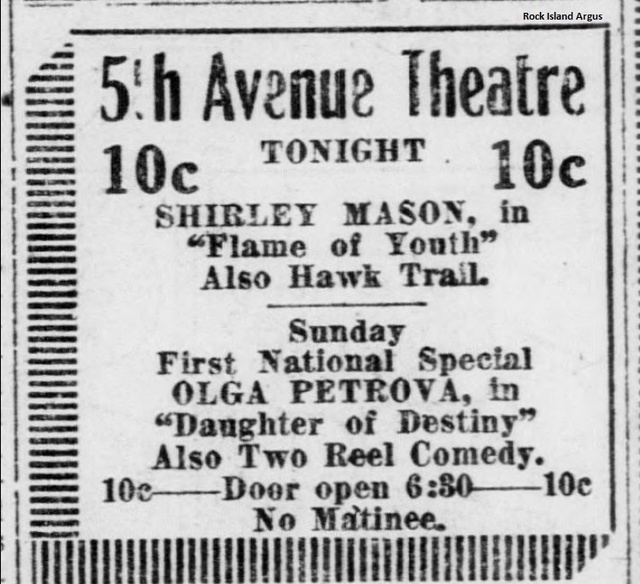 The Fifth Avenue Theatre was a silent-era venue operating from 1917 to 1922 in Rock Island. The theatre was located in the Shields Store Building. Grocer John T. Shields was one of the founders of the theatre. Shields had been a grocer a block away from 1889 to 1899 closing the grocery at the end of a lease. Shields built a new structure called the Shields Store Building beginning in 1899. He completed the structure the following March relaunching there as the Shields Grocery Store.

In 1917, Shields was convinced to close the grocery in favor of a movie theatre. He used his store clerks as the theatre staff. Unpaid tabs from the former grocery store were welcomed at the new Fifth Avenue Theatre which launched August 22, 1917.

The theatre had Powers projectors and had 500 seats. It was the ninth motion picture house in Rock Island. The opening film was Marguerite Clark in “Silks in Satins” and a live performance by Chicago baritone James T. Kearn. For nearly five years, patrons got a short film, a main film, and a live vaudeville performer for ten to twenty cents for admission.

On July 27, 1922, the line-up at the 5th Avenue Theatre was a film starring Hobart Bosworth in “His Own Law”, a two-reel comedy and a live performance by Ulysses, the African-American magician from Chicago. Apparently, as his last act, Ulysses made the theater vanish as the operation went out of business that night.

After some campaign speeches and events were hosted there in the 1920’s, the theatre was converted for use by the Nelson Motor Company Garage. The structure has since been razed.