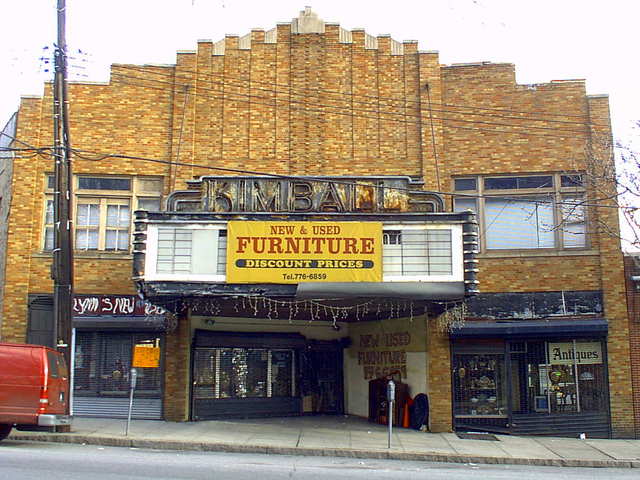 Originally built as a shirt factory, it became a movie studio and then a skating rink. The Kimball Theatre in Yonkers was opened March 12, 1937 with Lily Pons in “That Girl From Paris” & Gloria Stuart in “Wanted, Jane Turner”. It was once owned by Samuel M. Rubin. In the mid-1970’s it briefly operated as The Movies. It was closed on July 29, 1979. It briefly reopened in 1980, but finally closed on January 1, 1981 with Black Sabbath in “Black and Blue in Concert”. After closing the decrepit marquee remained above the theatre’s entrance. The interior was most recently used as a showroom for new and used furniture.

The former theatre was badly damaged in a fire in November 2004. Another fire on January 9, 2010 did further damage to the remains. The front section of the building still stood in 2015 and was demolition began in summer of 2016 and was completed in December 2016.

Another fire occurred on 01-09-10 in whatever still remained of the Kimball: View link

Here is another photo:
http://tinyurl.com/yk4kx4m

YONKERS â€" A developer wants permission from the
city to build a 15-story tower at the site of a
burned-out theater.

Blue Real Estate Holdings LLC of 470 Nepperhan
Ave. is proposing to build an age-restricted, 220-
unit complex at 1217 Yonkers Ave., the site of the
former Kimball Theatre and a row of shuttered
businesses.

The developer has submitted its request for zoning
exemptions to the Zoning Board of Appeals,
including a height variance for the proposed 165.1-
foot building, which is 30 feet higher than the city’s
zoning allows. The developer also needs variances
for floor-area ratios and lot coverage, among other
issues. The plan includes 235 underground parking
spots.

At the applicant’s request, a scheduled June 15
zoning board hearing has been postponed. The
board’s next meeting is July 20.

In its application, the developer’s attorney, James
Veneruso, wrote that the project “will be of
tremendous benefit” to the city because “the
dilapidated Kimball Theatre will be replaced by a
beautiful state of the art building; and (2) the project
will meet the needs of the community by helping
revitalize the area.”

Residents at 475 Bronx River Road and 52 Yonkers
Terrace already have objected. The buildings'
attorney, Evelyn Petrone, wrote to the city that the
proposed tower doesn’t fit in the area and, if built,
will worsen traffic and parking problems.

In a May 18 letter to the zoning board, Westchester
County acting Planning Commissioner Edward
Buroughs praised the proposal because it fits with
the county’s vision for dense development near
public transportation. The Mount Vernon West train
station is nearby.

“It will direct growth to an already established
center, where the existing infrastructure will
support the development, and where transportation
options can be provided and services can be
obtained within walking distance,” Buroughs wrote.

How many seats did this theater have? I saw an aerial photo of it and if they would have been interested restored it, it could been converted into a beautiful and massive multi-screen theater. It certainly has the space.

I went inside this briefly while it was a furniture store and it absolutely took my breath away. I walked out of that place dreaming of what movies people must have seen during it’s heyday. It breaks my heart that that entire block suffered damages from the fire.

The Kimball Theatre operated briefly in the 1970s as The Movies. See advertisement in photo section.

It looks like it might be the end for the last remains of the Kimball Theater. This is a link to an article in The Journal News:

The Kimball Theater was totally demolished with the past week.

Here is a link from the local newspaper:

The Kimball closed on July 29, 1979 as a sub-run discount house but reopened in 1980 for one last run from an operator in New York City. It appears to have closed January 1, 1981 with Black Sabbath and Blue Oyster Cult in “Black and Blue in Concert.”