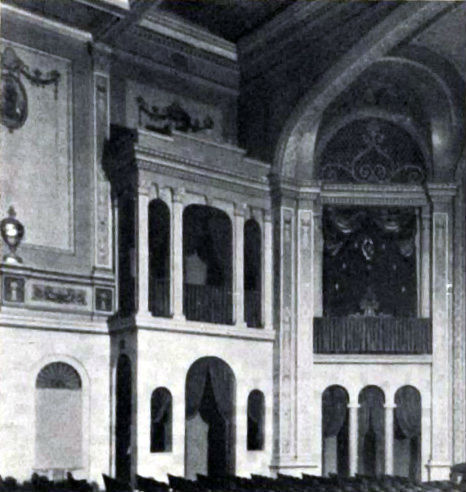 Milwaukee’s COLONIAL theatre was really two theatres if one considers the original Colonial Photoplay ‘parlor’ of 1910, the footprint of which was only the lobby portion of the succeeding Colonial movie palace of 1926. As of today, there are some 20 theatres listed on this site having the name Colonial in some form, and it is hardly difficult to discern just why that name was so popular in the United States, one of the original ‘colonized’ lands. Indeed, the era of that colonization spawned perhaps the first hybrid decor elements of a native land, England, with the adaptations of its colonial land, America, such that the Early American decor became a distinct style in its own right. Both of the Colonials mentioned here did feature some elements of that style, but mostly it was seen in the movie palace.

When the first Colonial was opened in 1910 it was a typical box-beams-and-pilasters rectangular auditorium with a shallow stage without stagehouse, since it was intended to show the ‘movies’ which were becoming all the rage then. A modest lobby led into the 800 seats on a single level with a few cast plaster ornaments reminiscent of the Early American decor. Its architects, Krichoff and Rose, became some of the most noted architects of their era in Milwaukee and graced that city with nine other theatres, in addition to many commercial buildings, as well as the famed Palace Theatre in New York City.

Comes 1926 and a new force in local movie exhibition, Saxe Amusement Enterprises, is quickly acquiring many of the choice pieces of real estate for movie houses, and it acquires the old Colonial photoplay parlor along with adjoining parcels, and demolishes them to provide space for a much larger movie palace by the same name to be designed by local architects Dick and Bauer. That firm would design five other movie palaces of some note, the: GARFIELD, MILWAUKEE, NATIONAL, ORIENTAL, and TOWER. Since the new movie palace of 1500 seats was to retain the name, it was deemed suitable to retain the decor theme also, so the facade boasted a small domed tower above the entry, with multi-paned windows that were illuminated at night, but it really served as the superstructure to support the upper end of the three story high vertical name sign. The three story high facade faced south, which provided excellent sun light for the residence on the second floor above the lone store on the first floor, just west of the six brass and glass entry doors below the canopy of the marquee. Above this was a trio of casement windows separated by Ionic pilasters supporting a pediment with a tympanum decorated in neoclassic scrolls. The remainder of the mansard roof featured three double hung dormer windows and the flagpole atop the dome would further emphasize the patriotic/colonial theme.

The ticket lobby behind the entry led to a 50-foot-long corridor with a gentle arc of a barrel vault ceiling and a simple terrazzo floor with illuminated movie poster frames between the fluted pilasters, which divided the corridor into segments. The grand lobby followed and was larger than the entire original show house. Its massive terrazzo floor was divided into large square areas by means of wide darker strips set into the lighter colored fields, the center one of which featured a circle enclosing a large compass rose. While large oriental carpets clothed parts of the floor, and pilasters divided the walls into large panels of antiqued glaze, it was the vast, projecting balcony surrounding the room at mid-wall height along with its sweeping grand staircase that dominated the room. Even the large wheel-shaped central chandelier, hung with a bowl of crystals and ringed with a line of candoliers, appeared small in this large three-story-high room, which also had a working fireplace! Upholstered settees and prints on the walls recalling revolutionary times completed the atmosphere.

One was not exactly overwhelmed upon entering one of the four aisles of the auditorium, since the balcony did not obscure most of the view of the leather upholstered seats under a ceiling divided into six bays by means of box beams with modestly painted plaster panels between them. Scroll form decals were painted onto the rim of the central ceiling dome, the cove of which furnished the only significant lighting in the room, there being no chandeliers. This was one of Dick & Bauer’s less expensive designs, and the economies employed in such neighborhood houses were evident everywhere. The walls were covered in simple damask panels with festoon and cameo ornaments at top, and finialed urns centered upon a mock balustrade at bottom. They proceeded forward to 2-story-high exitway ‘pavilions’ built out from the wall to mate with the organ screens set at a 30-degree angle into the splays bordering the stage. Swags of silver satin draperies adorned these mesh screens with ornate pendants of padded silver satin hung with tripled tassels. The centerpiece of the decoration was the elliptical mural centered upon the sounding board, which featured a painting of Betsy Ross making the revolutionary government’s flag. The rather shallow stage featured more of the silver satin swags as the grand drapery, adorned with two, ten-foot-high silver satin pendants, each of which were hand tinted and hung with three, two-foot-long tassels. The seven swags were deeply fringed and hung over a flat, dark velvet lambrequin that boasted an ornately scalloped bottom edge with silver appliques in a modified akroter design. The legs of the grand drapery swept down to the stage, each having a single tieback tassel some three feet long of four satined molds above the skirt of bullion-style fringe. I know, because I saw these at twilight on the day of demolition, where I could only admire them, since there were too high above the remains of the stage to be reached to salvage them for posterity, sad to say! (Imagine how the three colors of lighting would have reflected off all that silver satin!) The same dark velvet of the lambrequin was used to face the rigid ‘tormentors’ which flanked the stage opening, both adorned with yet more silver satin pendants in a larger version of those on the organ screens, and each hung by silver ropes and also suspending three ornate tassels each.

At first, the movies were accompanied by the three manual, ten rank Barton theatre pipe organ, but later the place was wired for the sound movies, of course. An image of this organ’s console and part of one of its pipe chambers appears on page 65 of Vol. 1 of the late David Junchen’s “Encyclopedia of the Theatre Pipe Organ” where one can see it in place on its four-poster lift. The small orchestra pit no doubt had a few musicians for the evening shows in the beginning, but the coming of sound films eliminated them, and any significant use of the fully rigged stage.

By 1946, a photo reveals the changes made as new owners brought in a much larger screen, which required the removal of the lambrequin, and all the pendants. Newly upholstered seats followed the reseating of the main floor, but the original leather-covered wooden ones continued in the seldom-used balcony. Like most all movie palaces, the Colonial had no parking, and as television came on the scene, the Colonial was one of the first to lose its patronage during the White Flight of the 60s, and by 1964, the theatre closed for good. It remained standing for ten more years as a warehouse for a junk merchant in a very changed neighborhood, but it was painful to see during the demolition how very much remained of the decor, to fall with the wrecker’s ball. A housing development for the disadvantaged holds the land to this day.

No, Charles, the COLONIAL on Greenfield Ave. you mention, was in West Allis, a suburb of Milw., and nothing remains of that theatre, the lot having been rebuilt upon in later years. That location was a 600 seater, not the 800 seater on Vliet St., the first building discussed on this page. We also had yet another COLONIAL on Milwaukee Ave. in South Milwaukee, another suburb, but that venue had only 400 seats and is also gone, having lasted only from 1910 to 1914. This data if from the 1986 book “Milwaukee Movie Palaces” by Larry Widen, and though out of print, copies can sometimes be found by book locator services, or viewed via Inter-Library Loan at most libraries.

I was born in 1923 a few years before most of you and my memories go back quite a ways. I attended Siefert School as a kid and Ice Skated at the rink they made when flooding the play ground. The warming shed produced a lot of memories for me. Went to West Division High School. Was an Usher at the Colonial Theatre on Vliet St. when I lived on 21st Vliet. One of my fondest memories was when I entered the Amateur Contest at Riverside Theatre and met Eddie Howard who heard me sing and gave me his business card and told me to look him up when I graduated from High School. By the way, I won first prize that night in the Amateur Hour. Of course, World War 2 came along and I entered the army and became a Paratrooper and went Overseas and after the war spent some real nice times in France and Germany. I ended up being a First Sgt. so I pretty much could do just about anything I wanted to do after the war. Well, moved from Milwaukee to live in Eagle Springs, WI on a lake there and from there moved to California. Came back to Milwaukee in 1956 and lived in Brown Deer before Milwaukee annexed it. Finally moved from Milwaukee in 1970 to FL. Moved several times after that and lived in CO, OR, SC and now retired in AR where I went to College while taking flight training before volunteering for the Paratroops. Well, not much of a story about Milwaukee but I bet I wouldn’t know the city if I returned. I haven’t been back to Milwaukee since 1970, however, my heart still skips a beat when I get mail from my buddies who still live there and with whom I grew up with.

I lived on 16th Between Vliet and McKinley until I was 4(1968) and I remember the Theater building across the street at the end of our alley, I did not know the name of it until I read this

Does anyone know what happened to that Golden Toned Barton Theater Pipe Organ, 3/10, manual/rank, keyboards/sets of pipes, shipped from the Barton factory in 1926?

Jim Rankin’s introduction to the Colonial Theatre says that the rebuilding of 1926 was the work of the architectural firm of Dick & Bauer. They should be added to the Architects and Firms field.

Photos of the Colonial are apparently scarce, but one corner of the auditorium is shown at upper left on this page of a promotional booklet published in the late 1920s by the Federal Cement Tile Co. of Chicago.

When the COLONIAL’s Barton organ was removed and its pipes were being carried out, the police were summoned by a passerby who thought the pipes were some sort of missiles. I’m told this scenario has happened elsewhere.

I write this, on the day after the death of Chuck Berry. His death reminded me of seeing him perform along with Lavern Baker, Little Richard, Jerry Lee Lewis at the Colonial Theatre. During the mid 50’s, many of the rising stars of Rock and Roll played at this theatre before Dick Clark started bringing his Cavalcade of Stars around the country to larger venues. This was a great time for the Colonial Theatre and should be noted as a part of it’s later history.